LaVar Ball Says He Would Have ‘Killed’ Jordan One-On-One, So SI Went Ahead And Simulated It 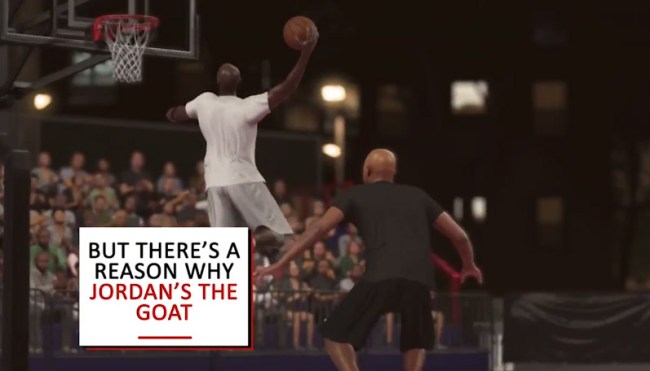 LaVar Ball, father of UCLA freshman Lonzo Ball, has a mouth that simply will NOT quit.

That was evidenced earlier today when, despite a warning from LeBron James to “keep my kid’s name out of your mouth, keep my family out of your mouth,” Ball once again had something else to say about King James and his son.

And while that in itself is pretty crazy, and a little stupid, nothing will ever top what Ball said to USA Today a couple of weeks ago about THE GOAT Michael Jordan.

“Back in my heyday, I would kill Michael Jordan one-on-one,” said Ball, the 49-year-old basketball dad who is 6-6 and 270 pounds and has a mouth to match his size. The elder Ball has spent his time touting his son as the next big thing in outrageous fashion (see: Curry comments) and trading verbal jabs with TNT analyst and ex-NBA star Charles Barkley.”
…
“I would just back (Jordan) in and lift him off the ground and call a foul every time he fouls me when I do a jump hook to the right or the left,” Ball said. “He cannot stop me one-on-one. He better make every shot ’cause he can’t go around me. He’s not fast enough. And he can only make so many shots outside before I make every bucket under the rim.”

This was actually said by a man who averaged 2.2 points a game for one season at Washington State back in the late eighties.

With all of that in mind, the fine folks over at Sports Illustrated decided to put together a little simulation of this imaginary game of one-on-one using NBA 2K17.

So was Ball able to do in the simulation what he claimed he would have done in real life back in his “heyday?” What do you think?