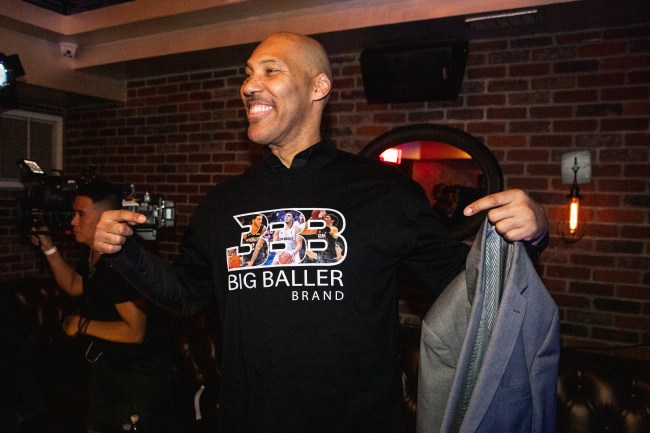 A wise man named Jay-Z once proclaimed you “can’t knock the hustle,” and, when it comes to LaVar Ball, he clearly epitomizes that phrase. After all, this is the same dude who pretty much sold out his entire family in order to get rich and famous, becoming the basketball equivalent of the Kardashians thanks to irate rants, reality TV shows and headlines that always cause a stir — even to BroBible’s own Matt Keohan.

While I respect LaVar for thinking like a business, man, not a businessman, he might be getting a little ahead of himself when it comes to this whole one-on-one thing against Michael Jordan.

For those who might’ve forgotten, LaVar Ball once said that he could beat the GOAT in a game between the two, which is crazy enough. But after MJ’s Charlotte Hornets drafted LaMelo Ball in the NBA Draft this week, the elder Ball doubled down on his proclamation, saying Jordan’s too “light in the ass” to win that contest. Yes, leave it to LaVar to talk crap to his son’s new boss. Sheesh!

Although Jordan loves to compete — and actually said on The Last Dance documentary that he has a competition problem — does anybody really think a one-on-one game versus LaVar Ball will happen? Probably not. Especially because, well, MJ doesn’t need it to happen. He knows he’s better. He doesn’t need the attention, nor the money. Remember, this is a guy who once turned down $100 million for two hours of work because he just didn’t want to do it. That’s next level.

Yet, because LaVar is LaVar, he’s out here trying to at least pique the interest of Jordan, hoping money can persuade the six-time NBA champ into agreeing to the contest. Hey, like Jay-Z said, “can’t knock the hustle.”

In a recent ESPN piece that highlighted the Ball family’s draft night, LaVar Ball talked about the possibility of that one-on-one game happening, saying he’d be in, but first wants to talk to Jordan about the business side of things and figure out how they’ll get paid. He even suggested it be on Pay-Per-View in order to really rake in the cash.

LaVar, quiet no longer, is accepting congratulations and telling the room, ‘Tell MJ: Here we come! Tell MJ we’re coming!’ LaVar punctuates his proclamations by raising both arms in the air. Michael Jordan, the man LaVar famously claimed he could beat in a one-on-one, is the owner of the Hornets and now his son’s boss. LaVar tells me the world might finally get to see that one-on-one, but first he has to discuss the business side with Jordan: pay-per-view, guaranteed money, that kind of thing. He laughs and says, ‘Hey, if people are willing to pay to see 50-year-old Mike Tyson fight, why not?’ He likes the idea of Jordan guiding his son. ‘Greatness recognizes greatness,’ he says. ‘I always told my boys, ‘Someone has to be better than the best — why not you?’

Again, slow clap for LaVar Ball for wanting to try and speak this into existence — especially if it gets him paid. But, c’mon, this does absolutely nothing for Jordan, and is the kind of tacky event that B-level athletes seem to do in order to stay relevant. That’s not MJ. Never has. Never will be. Maybe LaVar should hit up Dennis Rodman, though, because this Pay-Per-View thing would probably be right up his alley.