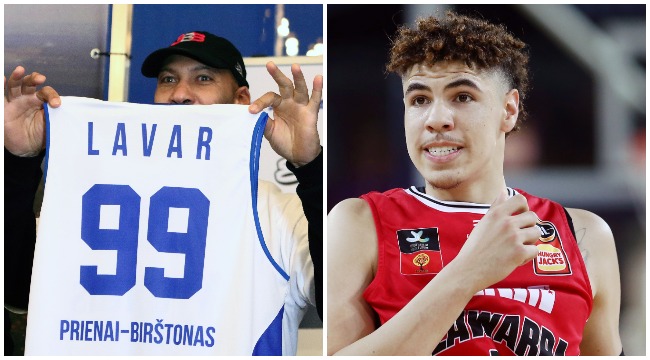 LaVar Ball’s superpower is that he possesses the singular ability to make a reasonable man believe that a 19-year-old kid signing a $100 million endorsement deal (with access to a private jet) is as sound a financial decision as investing in a string of Radio Shacks in the Serengeti.

For the one hour we spoke with LaVar Ball on our Endless Hustle podcast, he could’ve told me that O.J. didn’t do it and I would have trusted that the high-speed chase was simply brought on by a case of the shits. I was putty in Mr. Ball’s hand. He says jump, I say ‘how high?’ I’m not proud of it. It’s my truth.

In any event, LaVar made news last week for his testy reaction to his youngest son snubbing Big Baller Brand for a nine-figure deal with the Germany-based PUMA.

After a week of reflection, the Ball Patriarch extrapolated on his feelings, and it’s evident he’s still salty about his son hitting the lottery before stepping foot on an NBA court.

@Lavarbigballer is convinced LaMelo's reported $100 million PUMA deal with access to a private jet is a RAW deal.

"What's he gonna do with a private jet? Tell his basketball team, 'I'll meet ya'll there!' 😂

“I’d love for my son to make a mistake and make millions off it!

We got some rims and tires coming out, that’s an apparel deal, that ain’t nothing but some clothes.

Sneakers come in pairs, you get twos. I’m about to have some rims and tires, they come in fours. You keep steppin’, I’m going to keep rollin’, and lets see who gets to the billions first.

You going to build your brand up, and they’re going to pay you pennies. That’s an insane amount of money to people who ain’t got no money.”

(That one hurt on a personal level.)

LaVar Ball tried to hurt me, but what is dead may never die pic.twitter.com/Qy1CWgpUPb

LaVar then goes on to deliver a sales pitch on why future athletes should forgo offers by the Nikes and Adidas’s and go with the company that sells discounted merch outside local volleyball tournaments.

“The only way they can be billionaires is with Big Baller Brand. Why? Because we own something.

Come to the Big Baller Brand, I give you a shoe and 40% ownership. So if you got all these followers and they’re buying your shoes and we sell your shoes for a God-dang $100, and we sell over a million shoes, now we got $100 million—$60 million come to me, $40 million go to you.

60-40 deal. Only reason you getting 40% ownership now is because you haven’t done anything.

Guess what’s going to happen when I approach the number 1 and number 2 pick for next year and the year after?

They’re going to re-look at that and say, you know what, ‘I think I’m going to bet on myself and go with this ownership thing.’

Now you don’t get done like Kawhi Leonard. You can’t even get your hand back. How you can’t get your own hand back!”

Last year, Kawhi Leonard and Nike sued each other in federal court over the ‘Claw Design’ logo modeled after Kawhi’s gargantuan hand. Kawhi claimed he invented the logo while he starred for San Diego State, but a judge determined otherwise. Kawhi lost the copyright suit and, like LaVar said, no longer owns his own appendage.

If you need a good laugh this morning, check out the images in Nike's countersuit against Kawhi Leonard over the Klaw logo. pic.twitter.com/6w0GlthV1P

Tune into the entire high-energy Endless Hustle interview with LaVar Ball below. He also talks about the NBA Draft, the state of the Big Baller Brand, his beef with Charles Barkley, his hopes for Biden’s presidency, his unorthodox parenting tactics, and more!