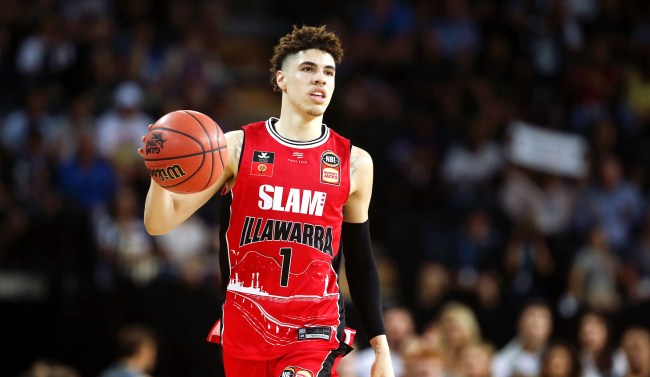 Can you feel it? We are only nine days away from Wednesday, November 18th, the day we will all officially have LaVar Ball back in our lives as his son LaMelo Ball gets selected in the 2021 NBA Draft.

LaVar has been pretty quiet of late, what with the pandemic and all happening, but he’s starting to get his mojo back as last week LaVar was interviewed by The Pascal Show and says he hopes his son gets drafted by either the New York Knicks or the Detroit Pistons.

Apparently his dream of having all three of his sons playing on the same NBA team have been put on hold since Lonzo is currently a member of the New Orleans Pelicans.

In October, LaMelo suprised many NBA fans when he decided to eschew his father’s Big Baller Brand and sign with Puma.

“Puma’s been making waves since their comeback to basketball, not just on the court but for the culture,” LaMelo told Complex.

LaMelo’s decision to sign with Puma also apparently came as a surprise to his dad LaVar.

During a preview for next week’s episode at the end of Sunday’s Ball in the Family, we see an exasperated LaVar Ball responding to the question of whether or not Lonzo and LaMelo will be coming back to his Big Baller Brand.

“Now the brand is back up and relaunched, do you plan on talking to Zo and Melo about committing to the brand?” Ball was asked.

“I’m not going to talk to them about coming back to BBB, because they never left!” Ball replied with an angry look on his face.

Later, we see LaVar talking to his wife Tina, saying, “You know what, f**k you, I’m gonna do it my own way. Without batting an eye.”

Of note, LaMelo Ball, so far, has not appeared in any of the first four episodes of Ball in the Family during its sixth season.