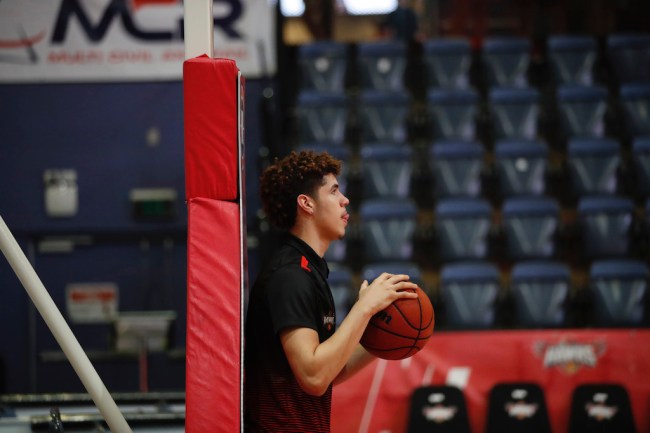 With the NBA Draft on November 18 this year, all eyes are on the top prospects as they try to make one last impression on the teams drafting in the top-10. One of those players expected to be selected early is LaMelo Ball, with some even thinking that the youngest of the Ball brothers could even go as high as No. 1 overall to the Minnesota Timberwolves, and, at worst, wouldn’t find himself dropping further than the top-3.

After playing professionally overseas for the past couple of seasons, many teams believe LaMelo has the chops to step in right away and make an impact in the NBA — especially if he ends up joining a franchise with young talent like Minnesota, Chicago or Atlanta. While most people aren’t questioning the 19-year-old’s hoops skills, according to a new report, some teams are questioning his personality, with Rick Bonnell of the Charlotte Observer detailing some of the things he’s heard from sources leading up to the NBA Draft about LaMelo.

“Here is what I’m hearing from the league at large: LaMelo Ball is not performing very well at job interviews. I’ve heard that from multiple sources. He is not improving his perception via job interview. There are people drafting later in the top 10 who were not preparing for the possibility of Ball still being around and, I’m not saying that he will be a top-three pick. I am saying that I know for a fact that there are teams later in the top 10 who are doing more research on him because they no longer think it’s a given he will.”

Now, I don’t want to group LaMelo Ball in with his outspoken and annoying dad, LaVar Ball — who would turn off more than a few teams with his attitude and personality if he were the NBA Draft prospect — but, if the teenager’s getting interview advice from his pops, then the report from Bonnell could make some sense. Even if LaMelo’s not taking tips from his dad, and he’s, in fact, just underperforming in interviews, who knows what that means about his landing spot in the draft.

Would a team really pass over LaMelo because he doesn’t carry himself a certain way? While it sounds stupid, the answer’s obviously yes, as we’ve seen players across all sports flame out because they didn’t have the maturity to handle being the face of a franchise. Think about Anthony Bennett in the NBA and JaMarcus Russell in the NFL — who both had talent, but didn’t have the work ethic or mental fortitude to handle the expectations of being the top pick.

Then again, this could all be smoke and mirrors, with Rick Bonnell being fed a bunch of rumors to try to fool other teams. It’s silly season leading up to the NBA Draft, and nobody wants to show their hand too early about a prospect.

Despite this report, one would imagine LaMelo Ball still gets drafted in the top-5. Then again, crazier things have happened — especially if he’s absolutely bombing the interview process — so we’ll just have to wait and see what happens.