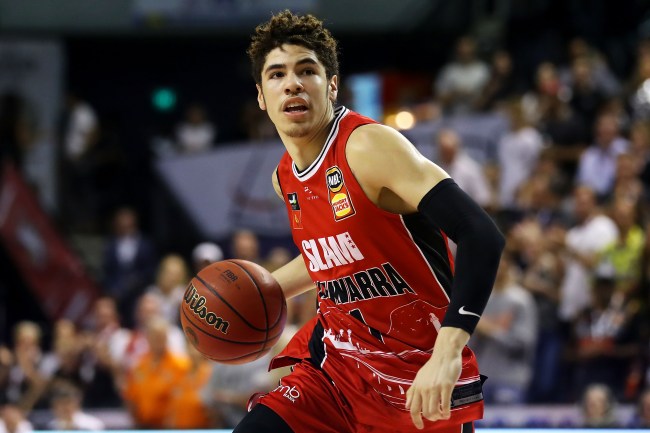 Most hoops experts agree that LaMelo Ball is one of the most uniquely talented prospects in this year’s NBA Draft; which is why he’s a projected top-3 pick. Problem is, he comes from a famous family — which includes being the younger brother of Lonzo Ball and the son of loud-mouthed dad LaVar Ball, who all have a reality TV show called Ball in the Family — so there are some concerns about the teenage point guard and the amount of baggage he may bring.

While that’s a totally fair reason why one of the teams picking in the Lottery may steer away from LaMelo Ball — because his dad, LaVar, has proven to be a major pain in the ass over the years — one anonymous NBA scout offered up an extended reason for the case against LaMelo. And it’s because it took some time for his brother to develop his shot in the league.

In a piece written by Marc Berman for the New York Post, the scout has a few concerns about LaMelo’s shot — which is understandable, as most rookies’ need help there — along with his lack of defense. However, this scout also thinks the youngest Ball brother is risky because his older brother’s shooting mechanics needed to be fixed, which, in essence, rubs off on LaMelo. Can’t make this stuff up, guys.

“LaMelo is a very dangerous choice. A very high risk-reward. All the baggage that comes with a decision like that is not what the Knicks need. Honestly, Lonzo [Ball] was a horrific shooter. He did manage to change his shot mechanics and now is a pretty good shooter. It’s very unusual but he did it and possibly LaMelo could, too.’’

There’s no denying that LaMelo Ball has his deficiencies heading into the NBA Draft; every prospect not named LeBron James pretty much does. But for this anonymous scout to suggest that Melo’s a dangerous pick because his brother Lonzo had trouble shooting his first year in the NBA is absolutely garbage. I mean, just because Lonzo struggled doesn’t mean Melo will. Seriously, it’s bush league shit that makes the scout seem like he’s got a vendetta against the Ball family — which he very well may.

It makes total sense for an NBA team to be concerned about any baggage LaMelo may bring because of his dad LaVar, but, sheesh, the ceiling on this kid is probably higher than any other prospect in this year’s draft, especially after the dude has already proven himself with professionals during his time playing in Australia over the past year.

Who knows how high or low LaMelo Ball will be drafted or how his NBA career will turn out. But to think that his progression will at all be correlated with his brother’s is such a bullshit suggestion.