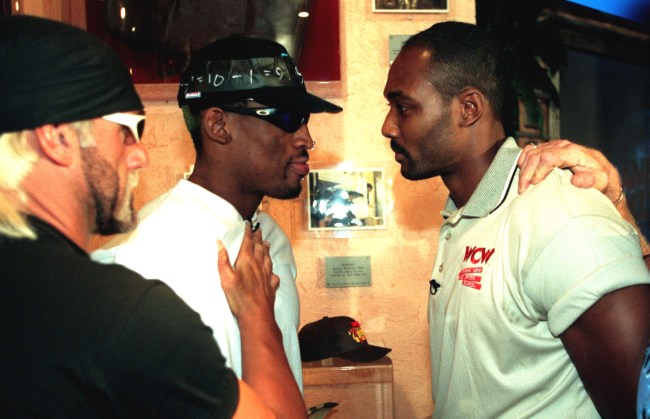 Viewers of the ESPN documentary about Michael Jordan a nd the 1997-1998 Chicago Bulls, The Last Dance, were reminded on the series’ final weekend of the fact that Dennis Rodman missed a practice during the NBA Finals that season to appear on WCW’sTV show Nitro with Hulk Hogan, and also had little mini-altercation with Karl Malone had during the deciding Game 6.

After the little dust-up on the court, NBC broadcaster Bob Costas reminded viewers of the game that Rodman and Malone were more than just basketball adversaries.

“[Rodman] and Karl Malone, regrettably, are scheduled to wrestle in one of those bogus events next month,” said Costas. “Why Malone wants to lower himself to that is anyone’s guess, and Rodman apparently wants to start the wrestling now.”

This week, former WCW president Eric Bischoff admitted that Dennis Rodman provoked Karl Malone during the 1998 playoffs in an effort to help fuel promotion for their upcoming match against one another at WCW’s “Bash at the Beach” pay-per-view.

“Now, what I said to Dennis, not to Karl was, ‘Hey Dennis, if anything were to happen off court while there’s a timeout, while there’s no gameplay, if you guys happen to rough it up a little bit on the sidelines or look like you’re going to and establish that intent so that the feud, if you will, between Karl Malone and Dennis Rodman is real, on a kind of a 360-degree basis, not just what happens on our television show,’ that wouldn’t piss me off at all,” Bischoff revealed to TMZ Sports. “It was kind of subtle, but clear, I guess?

“I did it in a way to, you know,be a little bit hands-off and make sure it didn’t interrupt gameplay, but I was happy to see it, let’s put it that way,” he added.

Bischoff also admitted that when he saw Rodman and Malone mixing it up on the court during Game 6 he “chuckled like a little kid because it accomplished so much. As a wrestling producer, to be able to create a moment, however subtly I did that and communicated, that played out on a platform so huge as the NBA playoffs was really satisfying.”

He also shared the fact that he “certainly didn’t expect Dennis to skip a practice and participate on Nitro. That decision was all Dennis. But he knew we had a show and it was live and he wanted to be a part of it, he was caught up in the excitement, enthusiasm and you know, he just decided to do what Dennis used to do which is kind of play his own game.”

Of that there is little doubt.