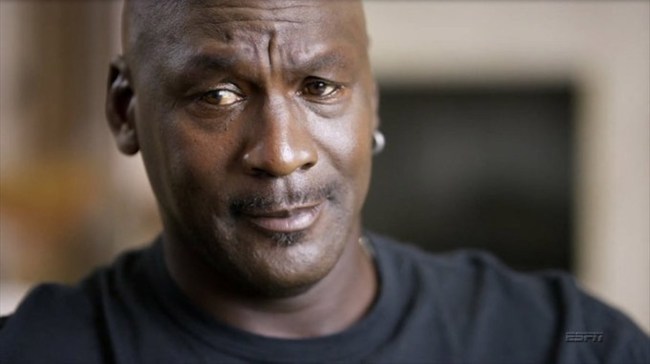 Much like when he retired for the second time following his second three-peat as an NBA champion, Michael Jordan has once again left us wanting more now that the final two episodes of The Last Dance are officially in the books.

Thankfully, the internet never forgets, which is why the classic Crying Jordan meme will live on forever.

Now the question becomes, will any of the at least four new Michael Jordan memes that were spawned during the 10 episodes of The Last Dance also have that kind of longevity?

First, we had the one that was sent into cyberspace by none other than MJ’s son Marcus.

Then we got one when Jordan cold-bloodedly laughed at Gary Payton thinking he could have guarded him.

After that came the meme that was created using Jordan’s reaction to Isiah Thomas trying to explain not shaking his hand after losing to the Bulls in the 1991 Eastern Conference Finals.

And now, thanks to then Chicago Bulls owner Jerry Reinsdorf giving his excuses for why he broke up a team that had just won three straight NBA championships and the year after Michael had won his fifth NBA MVP and sixth NBA Finals MVP, AND just won the scoring title (again), we have what may perhaps be the best new Michael Jordan meme yet.

This will forever be known as the Jerry Reinsdorf Meme now for #WhiteSox fans. #LastDance pic.twitter.com/ukbPrCAeuN

Take it away, internet…

When someone tells Jordan LeBron is better than him #TheLastDance pic.twitter.com/HXuRmZCjIs

When Michael Jordan hears you've been making memes off of his documentary reaction shots. pic.twitter.com/5y4HReAwLc

When you know someone's lying but you let them tell the story anyway #TheLastDance pic.twitter.com/6fekNHmt5E

thank you forever to the best part of the jordan doc pic.twitter.com/XoDcAmKflD

What a legacy, of memes, His Airness leaves behind. He truly is the GOAT.

They combined the clip of Lebron saying he’s the GOAT with the Jordan laughing clip. The internet wins LMAOOOO pic.twitter.com/FwMZLSMvZh