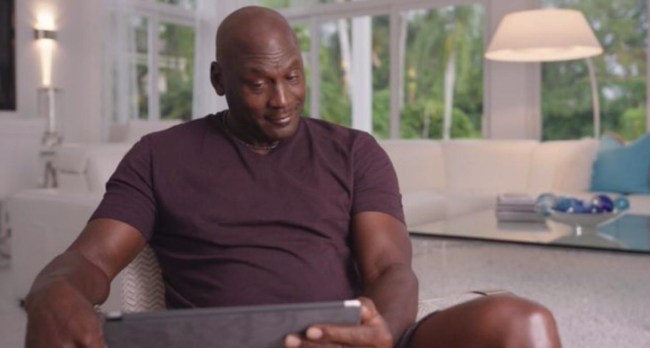 During one of Sunday night’s episodes of the ESPN documentary series The Last Dance, Michael Jordan was asked to watch a video of former Detroit Pistons guard Isiah Thomas trying to explain why he and the rest of the “Bad Boys” walked off the court after losing to the Bulls in the 1991 Eastern Conference Finals without shaking their hands.

Isiah Thomas trying to explain why the Pistons didn't shake the Bulls hands after losing to them in the playoffs. pic.twitter.com/sYmxViTiXN

Before even watching it, Jordan said whatever Thomas had to say, it was probably going to be BS and that there’s no explanation Isiah could possibly come up with that would convince Jordan that Thomas wasn’t being super petty.

“Whatever [Isiah] says now, you know it wasn’t his true actions then,” said Jordan. “[He’s had] time enough to think about it, or the reaction of the public that’s changed his perspective. … You can show me anything you want. There’s no way you can convince me he wasn’t an a–hole.”

The face Jordan makes as he is watching Thomas on the iPad immediately became the next great, very relatable Michael Jordan meme. Or, MeMe as Dwyane Wade put it in a tweet.

Related: Michael Jordan’s Son Marcus Shares Photo Of His Father For The Memes, Internet Does Not Disappoint

Which led to these tweets.

Her: “I don’t normally do this on the first date”
Me: pic.twitter.com/bTqbxEgpTT

My face when I’m trying to figure out what a “MeMe” is pic.twitter.com/Ux0H7H8d0p

when you text her with sarcasm and she texts back with a better sarcasm.😂 pic.twitter.com/Mz5PBnKi78

Me when you give Aaron Gordon 9 pic.twitter.com/uFFTOZgs2p

Of course, Wade wasn’t the only one to notice the look on Jordan’s face.

When people start beefing in the group chat pic.twitter.com/A1KxLkyEse

When my aunts are criticizing each other during Zoom family meetings. pic.twitter.com/SraI53D1Hj

Me reading my drunk texts the next morning #TheLastDance pic.twitter.com/YP3Jo21Ij4

The younglings when they googled “Carmen Electra.”

That wasn’t even the only Michael Jordan reaction from his watching Thomas’ video that went viral as a new meme.

me looking at the photos of crowded beaches while the rest of us have been in isolation for 50 days pic.twitter.com/j1MinqSEzb