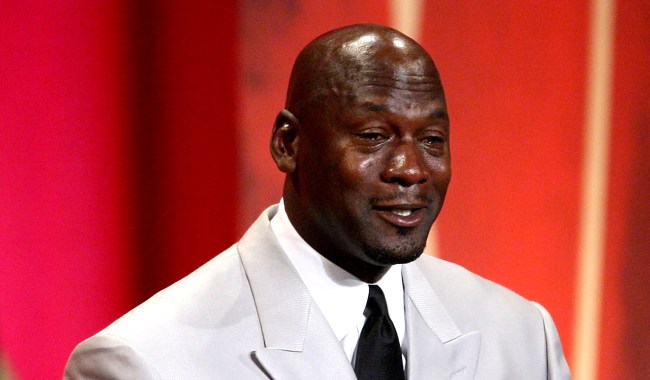 It’s also been 10 years to the day, September 11, 2009, since Michael Jordan made history during his induction into the Naismith Memorial Basketball Hall of Fame. Of course, we’re talking about the “Crying Jordan” meme.

As is the case with everything else he did in his storied basketball career, Hall of Famer Michael Jeffrey Jordan holds the title of GOAT, even when it comes to memes.

Michael Jordan hasn’t played in an NBA game since April 16, 2003. And yet, he still makes more money from Nike than hoops legends like Kobe Bryant and LeBron James.

It’s also been 10 years to the day since MJ was inducted into the Hall of Fame. And yet, anytime a person or team falls short of expectations or fails in a spectacular fashion, there he is on social media… crying.

VILLANOVA WINS THE #NationalChampionship!!!! UNC GOES DOWN 77-74 ON A BUZZER BEATER THREE! pic.twitter.com/0c3U5wF6ho

The “Crying Jordan” meme has become such a staple of internet culture people have even gotten giant, incredibly realistic tattoos of the historic moment in sports.

It’s also been a question on Jeopardy!, used as the name of a softball team, been used on album covers, had a documentary made about it… twice, and been used to create custom sneakers.

In 2016, efforts to replace the “Crying Jordan” meme with a “Crying LeBron” meme fell flat.

The “Crying Jordan” meme has been made into a faux 30-for-30 film and been referenced by the President of the United States during a Medal of Freedom ceremony.

Back in 2016, the GOAT himself even talked about the meme, telling TMZ, “Everyone seems to be having fun with the meme. We haven’t seen anyone using it to promote their commercial interests, which is something that we’re monitoring.”

It’s come, gone, and come back again. The “Crying Jordan” meme appears here to stay… like it or not.

Now please enjoy some of the best “Crying Jordans” we’ve seen over the past decade, created by a graphic design wizard we’ve featured here before, Bryce Wood. And feel free to share some of your faves over the years with us over on Twitter.

Damn, this meme is getting old af! pic.twitter.com/HIPzUcmNZ9