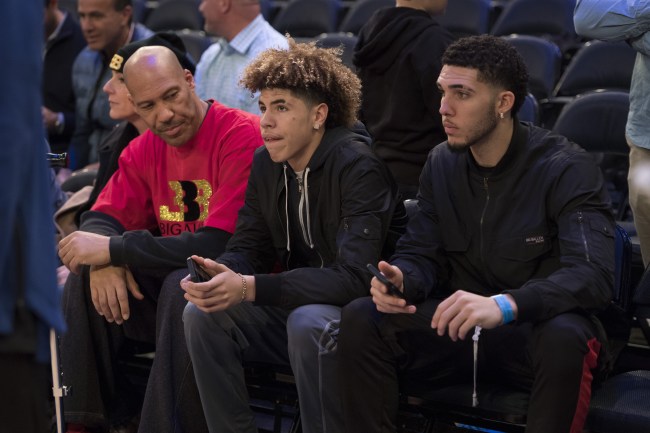 Lavar Ball is never one to bite his tongue or watch his words, so it shouldn’t be surprising that he’s now touting his middle son, LiAngelo Ball, as the next phenom in basketball, even saying that he’s better than Zion Williamson. Remember, Lavar’s the same guy who once said that LeBron James’ sons are going to be whack at basketball, so, yeah, the dude will do anything to get his family attention.

As most of us are aware of by now, Zion Williamson is going to be the No. 1 overall pick in this year’s NBA Draft, with every crappy NBA team hoping that the ping pong balls go their way in order to snag the kid from Duke who took over the basketball world this season. Zion belittled his opponents with grown-ass men things, won a bunch of player of the year awards and is believed to have a hoops career that could earn him as much as $1 billion. But that didn’t stop Lavar Ball from disrespecting Williamson by saying he “couldn’t hold a candle” to the middle Ball brother, LiAngelo.

Speaking to TMZ Sports, here’s what Lavar Ball had to say

“He ain’t no big baller,” LaVar said of Zion, who he claimed “can’t hold a candle” to LiAngelo. “He’s a Williamson. Williamson’s ain’t stronger than Ballers,” he continued, while also explaining that he thinks Zion can’t play like LiAngelo. “Biggest and the strongest 2-guard in the NBA right now. Ain’t nobody built like him at the 2-guard. Nobody. 6-6, 240, can shoot the three, post you up, kill you. But, you going to see. You going to see.”

Well, tell us how you really feel, Lavar.

In addition to going after Zion by suggesting LiAngelo Ball would be the No. 1 overall pick in this year’s NBA Draft would he have been eligible — which he’s not — Lavar Ball also said that LiAngelo’s prime for big things in the NBA soon… in the summer league. Insert eye roll here.

Look, I don’t want to rip a 20-year-old kid, LiAngelo, who could end up being a star in the NBA, but, come on, it’s a little insane to think he’s going to be better than Zion Williamson — who’s the most polarizing college hoops player in the past few decades. Considering Lavar Ball had to organize his own high-school All-American game just to get his youngest son, LaMelo Ball, some more pub with other talented players his age, I’m a little skeptical of Lavar’s proclamation and overall talent evaluation.

All of this nonsense comes on the heels of Lavar Ball’s Big Baller Brand being in a, well, really crappy situation. After news broke that one of the co-founders, Alan Foster, reportedly stole $1.5 million from Lonzo Ball, the entire brand is in a state of flux. Hell, even the website BigBallerBrand.com isn’t currently functioning, which means the company is either in an even worse state than we all even thought, completely shutdown or the site’s just going through some oddly timed maintenance.

Regardless of what happens with LiAngelo Ball’s basketball future, one thing’s for damn sure: Lavar Ball will never stop running his mouth and touting all of his sons as legends before they do a single thing. Keep on ballin’ out, Lavar.