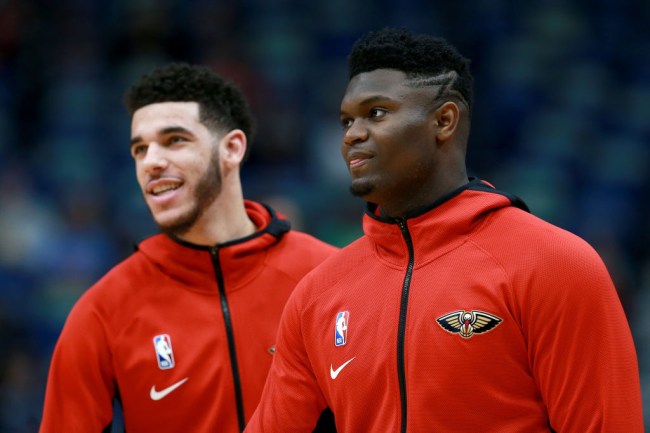 It’s hard to remember an NBA prospect who managed to come close to the level of hype that surrounded LeBron James during his high school days until Zion Williamson came along, and even though only time will tell if he’ll ever come close to dominating the league the way The King has over the course of his career, it seems like it’s in the realm of possibility based on how he performed during his shortened rookie season.

There could be one major barrier to prevent that from happening based on the multiple injuries he’s suffered over the past couple of years, the most notable of which occurred during his time at Duke when his damn shoe exploded in the middle of a game, which resulted in him being sidelined for the remainder of the regular season.

However, that didn’t stop ESPN from keeping a camera pointed at him during a contest he wasn’t even playing in and CBS followed suit during the NCAA Tournament with its own version of the “Zion Cam” that followed his every move.

It was only natural that all eyes were on him when he made his NBA debut after suffering yet another knee injury—which may or may not have had something to do with the fact that he’s one of the heaviest players in the league’s history despite “only” being 6’6″—that delayed the official start of his rookie year.

It’s safe to say he lived up to expectations based on the absolute tear he went on after kicking off his professional career, and even though Ja Morant looks like he’s the favorite to walk away with Rookie of the Year honors as things currently stand, his efforts were still enough to make him part of the discussion despite the fact that his first year was abbreviated.

However, if LaVar Ball is to be believed—which he probably shouldn’t be based on the number of baseless claims he’s made in recent years—Williamson wouldn’t have been able to achieve much of what he did this season if it wasn’t for his son Lonzo.

The man with the biggest mouth in the basketball world recently claimed he would’ve easily dispatched the Pelicans star if they’d played one-on-one back in his prime and he recently spoke with Complex and asserted Lonzo has been a major factor in Williamson’s success.

"Look what happened to Kuzma (this year). They thought I was crazy when I was telling them Lonzo made Kuzma." 😂

Lavar says without Lonzo, Zion wouldn't have the buzz.

Ball also said Lonzo was instrumental in helping Kyle Kuzma take his game to the next level before he left the Lakers and suggested he’s managed to similarly help Williamson in New Orleans, saying:

“Take my boy out the situation and see how much buzz you get,” Ball said. “He’d probably still be out for the season

I don’t care how fast you can run and jump. If you ain’t got nobody to get you that ball, guess what you going to be doing? Running and jumping out there for nothing.”