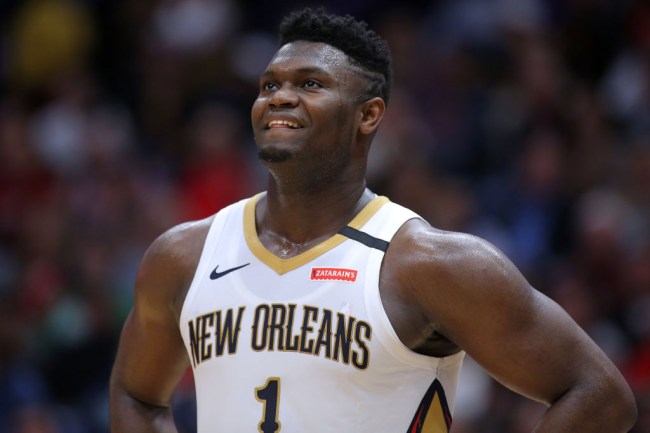 Zion Williamson was far and away the most exciting prospect in recent memory when he headed to Duke for his first and only season with the Blue Devils, and while he sat out a sizeable chunk of the year after his damn shoe exploded, that didn’t stop the generational talent from being the clear favorite to go first in last year’s NBA Draft.

The Pelicans did indeed opt to scoop up Williamson with the first pick but he suffered yet another setback in October when he suffered a knee injury during a preseason game, which sparked a discussion concerning whether or not he was rocking too much weight onto his 6’6″ frame.

Last year, Williamson revealed he packed on 100 pounds between his freshman and junior year in high school and subsequently started to dominate, and by the time he took his talents to Durham, he weighed around 285 pounds, which would be enough to classify him as “obese” if you calculated his BMI.

Nike has reportedly expressed some concern over Zion’s weight but he’s brushed off any criticism that’s come his way by claiming he’s simply built differently than most other guys his size.

While self-admitted chunkster Charles Barkley has also said he’s worried about the rookie’s longevity, Pelicans GM David Griffin doesn’t seem to think it’s an issue and says he’s more concerned with getting the young player to work on his flexibility as his game (and his body) continues to develop.

It also appeared Williamson isn’t too preoccupied with slimming down, as according to Larry Brown Sports, Bill Simmons recently revealed a reliable source informed him the New Orleans forward currently weighs over 300 pounds, which would make him the third heaviest player in NBA history behind the 7’1″ Shaquille O’Neal (324 lbs) and the 7’6″ Yao Ming (310 lbs).

With that said, Zion seems to be doing pretty well for himself regardless of how thicc he may be, as he’s currently averaging 22.8 points per game and grabbing 7.2 rebounds.

I’m in awe of this absolute unit.