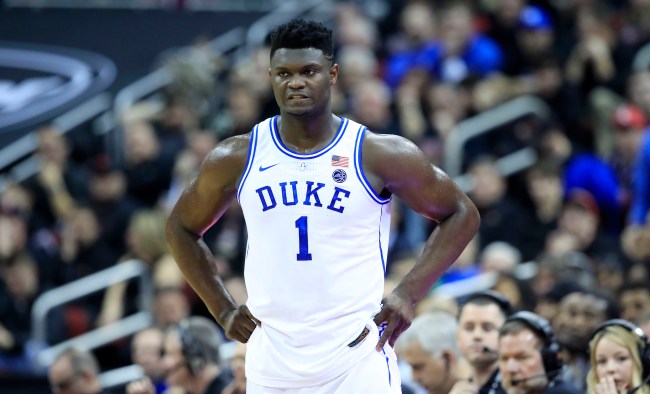 Zion Williamson is a man amongst boys in college basketball, with the Duke Blue Devils freshman doing things on the hardwood that most human beings can’t even fathom trying. Listed at 6’7″ and an insane 285 pounds, Williamson might look more like a defensive end in the NFL than a teenage hoops star who’s set to become the No. 1 overall pick in this year’s NBA Draft.

While Zion Williamson may be a physical specimen these days, just two years ago he was anything but. That’s because, according to an interview with writer Devin Gordon of GQ, it wasn’t until his junior year of high school that he finally grew into his body, which eventually led to him becoming the freak athlete that he puts on display every time he steps onto the basketball court.

“I didn’t pick up all this weight until junior year. Freshman year, I was small. I was 6’3″, 175—like, I was small. And over the course of about two years I picked up a hundred pounds. I mean, I wouldn’t look at myself and go, ‘Wow, I’m 250!’ I wouldn’t know I was 250 until I stepped on the scale, and then I’m like, ‘Oh. I’m 250? I don’t feel 250. I don’t feel slow.’ Like, with all that weight just came more athleticism and finding myself able to do new things. People always say you have to grow into your body, but for me, it wasn’t even growing into my body—the more weight came, it didn’t phase me. It made me faster, stronger. It helped me become a more versatile player.”

Considered by one opposing head coach as the most-hyped ACC player since Michael Jordan — which is rare company to be in — with a career that experts believe could exceed $1 billion, Zion Williamson’s massive growth spurt a couple years ago has definitely benefitted him in ways that he never could have imagined. And to think that he can still jump out of the gym with all that weight is just scary.

Averaging an impressive 22.4 points, 9.2 rebounds, 2.3 assists, 2.3 steals and 1.9 blocks per game in his (probably) lone season with the Dukies, the sky’s the limit for Zion Williamson, and he can thank those extra three bills for taking him to a level that his peers just couldn’t compete with. It’s no surprise that he’s singlehandedly causing ticket prices to balloon for people who want to see him play. Dude’s an absolute freak of nature athletically.