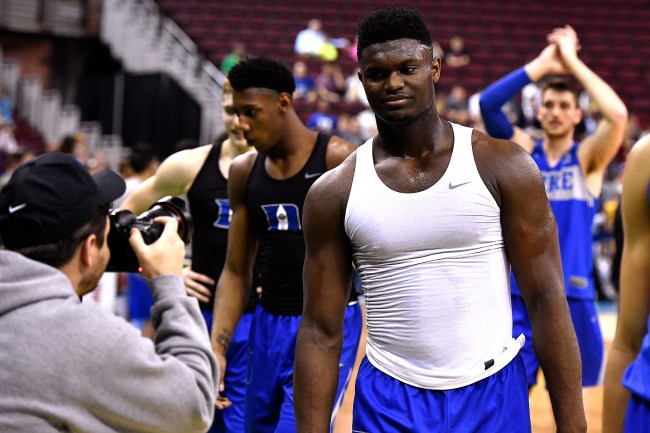 Zion Williamson has yet to play in his first NCAA Tournament game, but that doesn’t mean he hasn’t already been the talk of March Madness as the games enter the second day. Obviously, the Duke freshman is a freak of nature who has dominated college hoops all season long, is the projected as the No. 1 overall pick in this year’s NBA Draft, and is the sole reason why the Dukies are the betting favorites to win the national title. With that type of hype comes lots of coverage.

And CBS is going to take advantage of Zion Williamson as much as humanly possible during his first NCAA Tourney game against North Dakota State, because the network is dedicating a camera known as “Zion Cam” to capture every single move he does during the game. Yeah, that’s how much CBS thinks (knows?) people want to see Zion.

With Duke’s first and, presumably, second games of the tourney in Williamson’s home state of South Carolina — where he won three straight state championships and earned South Carolina Mr. Basketball his senior year — there’s even more hype than usual as the kid takes the floor later today. And, according to CBS’ Marc Wolff, who has worked with the network to produce the NCAA Tournament for 35 years, that’s just one of the reasons why “Zion Cam” became an idea.

“Because of Zion (Williamson), we have added a camera dedicated to him the whole time he is on the floor,” said Wolff, who has risen to be the network’s coordinating producer of college basketball. “We hired a cameraman, a camera, a digital tape machine to record everything he does.”

“We were recording his workout here today in the event something were to happen,” Wolff said. “We are monitoring Zion 24-7.”

“I thought Bill Walton was a dominant player,” Wolff said, “but this guy…”

It may seem like a little much for CBS to do — especially since Zion Williamson is just a “student-athlete” who can’t profit from such extreme coverage, but everyone and their grandmother wants to see this kid play, so it’ll be interesting to see how this “Zion Cam” works out. Remember, ESPN did something similar during one of the games Williamson missed after hurting his knee last month and sort of got shredded for it, but maybe CBS executes it a little bit better? Guess we’ll have to wait to find out.