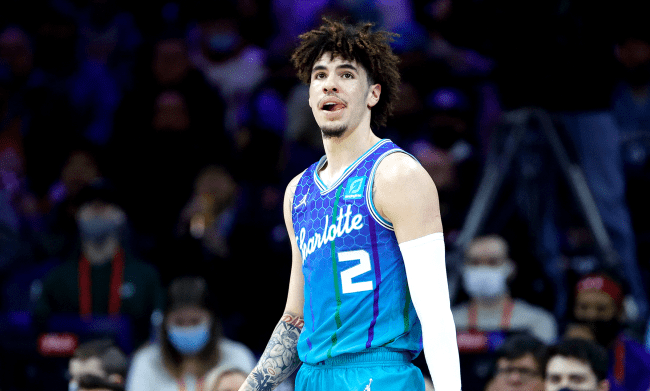 Wait, someone in the illustrious and controversial Ball family is being accused of playing fast and loose with millions of dollars? That’s what a woman named Amber Johnson, who says she worked as LaMelo Ball’s publicist, is claiming.

According to a new lawsuit, obtained by TMZ Sports, Johnson claims LaMelo Ball hired her in 2019 to work on various business deals on his behalf.

In return for her work on business deals for now 20-year-old LaMelo, she claims she was to be paid 10 percent for any deal she acquired, plus any out-of-pocket expenses she incurred in the process.

In October of 2020, it was widely reported that LaMelo Ball had signed an endorsement deal with Puma worth an estimated $100 million.

Related: LaVar Ball Explains Why LaMelo Ball Got Fleeced On His $100 Million PUMA Deal And Why Access To A Private Jet Is Just A Gimmick

In addition to landing deals with a video game streaming show Game Time, and streaming service Caffeine.tv, Amber Johnson claims in the lawsuit that she helped facilitate communication between Puma and Lamelo Ball.

Johnson says that contacted Puma North America’s entertainment division to discuss whether the company might be interested doing in a brand partnership with Ball.

According to the lawsuit, in August of 2019, Ball’s his agent and manager Jermaine Jackson told Johnson to stop talks with Puma because, according to him, Ball was probably going to end up signing a partnership deal with Nike.

With her out of the picture, LaMelo ended up signing with Puma anyway.

In the lawsuit, Johnson “alleges that she was integral in identifying a potential deal between Ball and Puma.”

Therefore, she believes LaMelo owes her over $10 million, including about $4,870 in unreimbursed expenses, thus the reason for the breach of contract lawsuit she filed in Los Angeles Superior Court on Monday.