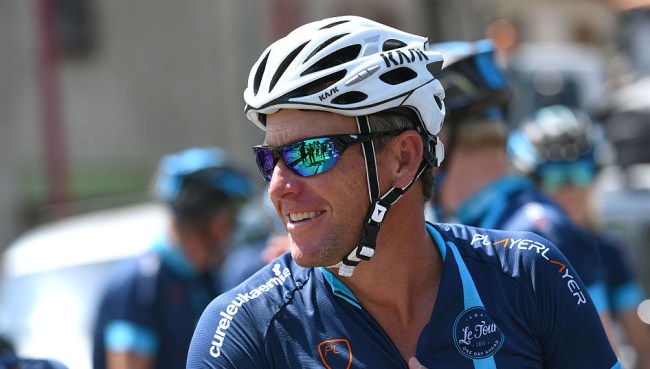 Lance Armstrong’s face had a nasty run-in with the Tom Blake trail in Snowmass Village, Colorado while riding his mountain bike on Wednesday.

Yep, he may be a *cough* seven-time Tour de France winner *cough*, but even he is not immune to a good faceplant as evidence by a bloody selfie he shared on Instagram.

“Took quite the blow to the noggin’ so swung by the Aspen Valley Hospital (great facility!) to get my head checked. For the 46 yrs prior to today I completely would have blown off getting checked. Not now. Small world story – a few weeks back I posted a pic of @ghincapie, @mikekloser, and myself. Credit photo to “some dude at top of buttermilk”. Well, that ‘dude’ turned out to be @ajaxrider – the ER doc on duty today! Charlie, thanks for looking after me.”

Interesting how Armstrong notes that prior to this crash he would have “blown off getting checked. Perhaps the native Texan was watching when Houston Texans quarterback Tom Savage was ridiculously allowed back in a game after getting his bell rung last season. Or is friends with Brett Favre, or knows LenDale White who played for the team that used to be in Houston, or… you know where this is going.

Also interesting? That “some dude at top of Buttermilk” took a photo of him and then healed him up in the ER a few weeks later.

Based on this video of the Tom Blake trail below, it’s pretty easy to see how one small misstep could lead one to smash their face. Even *cough* seven-time Tour de France winner *cough*.