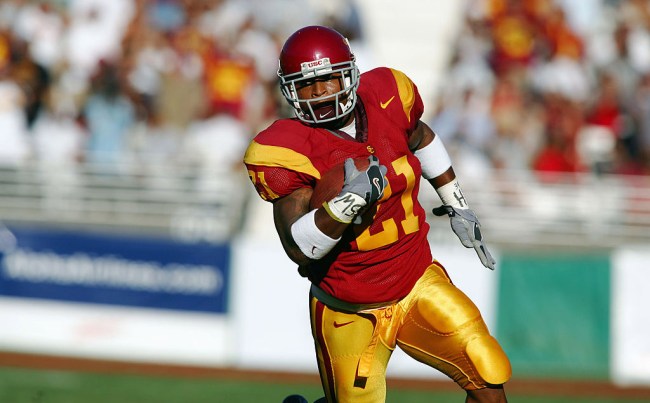 By most measurements former NFL and USC running back LenDale White had a rather successful football career.

In college he teamed with Reggie Bush to run for 3,159 yards and 52 touchdowns in three years, a USC record, including leading the nation with 24 rushing TDs in 2005.

As a pro, White only played four seasons, but still managed to have a 1,000 yard season in 2007. In the 2008 season White scored 15 touchdowns playing for the Tennessee Titans alongside then rookie Chris Johnson who would go on to eclipse the 2,000 rushing yard mark in 2009.

Johnson’s addition to the Titans led to White being traded to the Seattle Seahawks, reuniting him with his old college coach Pete Carroll. Most viewed this as a perfect match since White was only entering his fifth season and Carroll obviously knew how to get the best out of White. Unfortunately, it didn’t work out that way and White was cut by Carroll leaving him with a bitterness that still lingers to this day.

In a new interview with the Los Angeles Times, White, still just 32, revisited many memories including the one in which Carroll cut him from the team…

Carroll informed White of the move in a phone call. The impersonal nature wounded White deeply. He felt abandoned. He lashed out at Carroll publicly, and he still has not gotten over the pain.

White’s feelings toward Carroll are complicated. “I’m more mad at Pete, the Seahawk situation, because he handled it like a coward,” White says.

White believes that Carroll should have cut him in person, but Carroll says, “Unfortunately, the timing and circumstances surrounding LenDale’s release didn’t afford me the opportunity to speak with him in person — something I always try to do. I am sorry he feels hurt by the situation and truly wish him well.”

And that was the end of LenDale White’s football career. A career in which he estimates that he suffered somewhere around 20 to 30 concussions with only one actually being diagnosed.

White estimates he sustained 20 to 30 concussions, about one every other game. But he can’t be sure. Only one was diagnosed, he says.

“You lose consciousness and then all of a sudden it’s like shoooo-ooooof,” White says, making a slurping noise, his eyes growing wide as he described the sensation. “Like, that’s how it sounds, like shhhhhhloooof, and then all of a sudden you hear the play again.” He’d wander around in a haze, Young directing him to the right spot until he regained his senses.

It’s those concussions he says led him to abusing pain pills. “And I don’t mean like popping a pain pill because I’m hurt. I mean popping scripts. Like 10 Vicodins at a time type [stuff]. You know what I mean? To feel it, like I’m high. To feel the numbness,” admitted White.

Eventually White ended his dependence on the pills with products made with cannabidiol, a less psychoactive chemical in cannabis, and he is now hoping it will do the same for others as he has invested in a farm that sells marijuana to dispensaries.