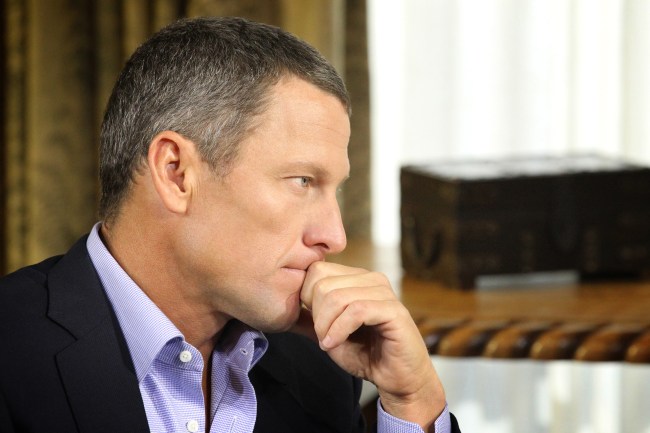 ESPN’s 30 for 30 documentary ‘Lance’ has given us an inside look into Lance Armstrong’s life, his come up as a triathlon wonder kid turned cycling phenom and, of course, the doping scandal that flipped everyone’s perspective on the seven-time Tour de France winner.

During Part 2 of the documentary Armstrong’s son Luke, who is a walk-on football player at Rice University, was asked if he would ever consider using performance-enhancing drugs like his father did. The answer he gave was to be expected, but he also revealed he always has his dad’s situation in the back of his mind as well.

“I’ve always felt like grinding for something, and really working for a specific goal has always been so much more worth it than taking the shortcut,” Luke said according to the New York Post. “I also feel like if I ever did that and got caught, for random people, they would be like, `He’s just like his dad.’”

Armstrong claims he began doping in 1995 at 23-years-old.

Film director Marina Zenovich asked Armstrong what his reaction would be if Luke went down the same path and decided to ‘take a shortcut’ as he described it. His answer was interesting, to say the least.

“If we were put in that position where Luke as a college football player came to me and either said, ‘I’d like to try this,’ or ‘I am doing this,’ I would say, ‘that’s a bad idea,’” Armstrong explained.

“It might be a different conversation if you’re in the NFL. But at this point in life, in your career, not worth it.”

Love him or hate him, at least Lance is completely honest. Having said that, his answer about not wanting his son to go down that same path in college, but maybe consider performance enhancing if he were in the NFL isn’t a good message at all.

Related: ‘Lance’ Documentary Director Shares How She Got The Normally Closed Off Lance Armstrong To Open Up