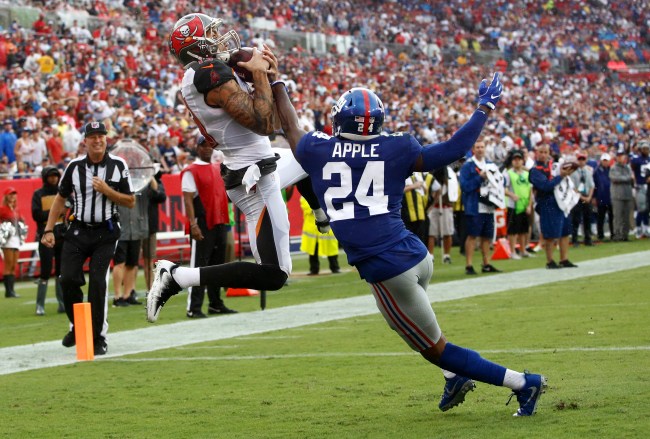 Quite possibly one of the most awkward places on the planet this year was at the Weinstein Thanksgiving dinner table. A close second may very well have been the New York Giants locker room. The benching of Eli Manning, the public disapproval of now-fired head coach Ben McAdoo, the second worst record in the NFL, and now dissension among its secondary.

As if suspensions of Dominique Rodgers-Cromartie and Janoris Jenkins wasn’t stressful enough for the G-Boys secondary, sprinkle in a fractured right forearm for Pro Bowl safety Landon Collins, and the precarious behavior of second-year cornerback Eli Apple, and shit is bound to hit the fan.

During a Tuesday interview with Bob Wischusen on The Michael Kay Show on 98.7 ESPN New York, Collins roasted Apple, who claims he and other teammates engaged in “sit-downs’’ with Apple “multiple times’’ to fix his behavior.

“There’s one corner that has to establish [himself] and needs to grow, and we all know who that is,” Collins said. “That would be the only person I would change out of our secondary group. Besides the other two guys — DRC and Jackrabbit — I love those two guys. They play hard. They love what they do. But, that first pick … he’s a cancer.”

Collins comments come just a couple weeks after his teammate was fined an undisclosed amount of money for tweeting on the sideline during a loss to the Dallas Cowboys.

When asked if he still wanted to be a part of the team following the incident, Apple said that he did.

“Of course. I’m blessed to be where I am right now,” Apple said. “I appreciate everything being here, alive. Football is something I love to do. It’s a blessing. You don’t want to take it for granted. I definitely want to be here, to be honest.”