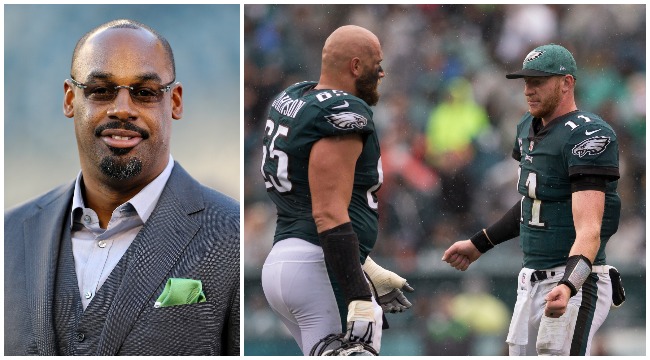 In his 11 seasons with the Philadelphia Eagles, Donovan McNabb solidified himself as the all-time leader in pass completions, passing yards, and passing touchdowns en route to leading the team to eight playoff appearances. He’s also the dude who lost four NFC Championships, underachieved in the Super Bowl, and puked while walking up to the line of scrimmage. McNabb also had a way of unnecessarily deflecting blame, which contributed to why the greatest quarterback in franchise history was never fully embraced by the city he called home for over a decade.

The now 42-year-old evidently doesn’t care what the city of Philadelphia thinks of him after claiming that the Eagles will need to start thinking about replacing Carson Wentz if they don’t reach an NFC Championship Game by next year. The six-time Pro Bowler said in a radio interview with Zach Gelb of CBS Sports Radio on Saturday:

I think in the next two years or so, he needs to find a way to get out of the second round of the playoffs. What Nick Foles was able to do, take them to a Super Bowl and then possibly take them back to the NFC Championship proves that, hey, some people can get into that offense and be very successful. [Wentz] hasn’t been healthy. He hasn’t really proven to me, besides the year before he got hurt, in his first year, of really the MVP candidate. He needs to get back to that mode.

Eagles offensive tackle Lane Johnson was not having any of McNabb’s weird ultimatum.

Johnson then went of 94WIP to elaborate on his comments:

This is what I meant — every training camp we have all of these ex-players come and shake our hands, wish us good luck. Then, they just go out and just talk hate. I feel there is a lot of envy, jealously, and I see a lot of fakery. It isn’t just me — a lot of other teammates see it too. You would think the best quarterback in franchise history would try to build up a young man that looks up to him instead of always criticizing him, critiquing him and wishing he would fail so he could be the missing link and feel better himself. That is what I don’t like.

Ohhhhh Shit 🍿🍿🍿@LaneJohnson65 That guy screwed my whole NFL career up. Love that people are seeing the real now. https://t.co/xJdibxcY1a