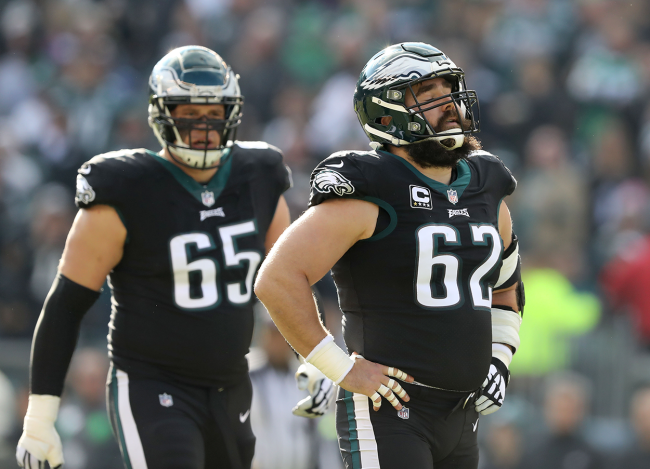 Eagles offensive linemen Lane Johnson and Jason Kelce are entering their 10th season together in Philadelphia. The two veterans are legends in the City of Brotherly Love and have developed quite a rapport with one another.

They are also great friends.

Johnson recently appeared on The Rich Eisen Show and told a hilarious story about Kelce. Eisen asked Johnson for his best story about his teammate and he delivered a great one.

Johnson hid Kelce’s helmet as a rookie back in 2013. Kelce was furious as he flipped over everything on the field trying to find it. Meanwhile, Johnson was giggling to himself.

After seeing his rookie teammate laughing at his expense, Kelce ran over and tried to kick him where the sun doesn’t shine. But he missed and what happened next is hilariously embarrassing.

Here is how Lane Johnson told the story about Jason Kelce in his own words:

“I don’t think you’ll get mad at this one. I’m a rookie, Chip Kelly’s the coach, we’re doing walkthrough in the indoor (practice facility). And the linemen, we’re in our own section blocking on buckets, looking at different defenses. So they called for him during the walkthrough and I had his helmet under one of the trash cans and it takes him about 5 minutes to find it. He’s throwing them, he’s flipping them. And the coach is telling him, ‘come on, what are you doing?’ And he sees me laughing so he knows I’m the culprit behind it. So he runs at me full speed and tries to Pat McAfee punt me in the private area. He misses, he hits my knee cap. He thinks he breaks his foot and he leaves practice to go get an MRI on it the same day.”

Fortunately, Kelce did not break his foot. It was bruised up a little bit, but the MRI came back negative. Hilarious.