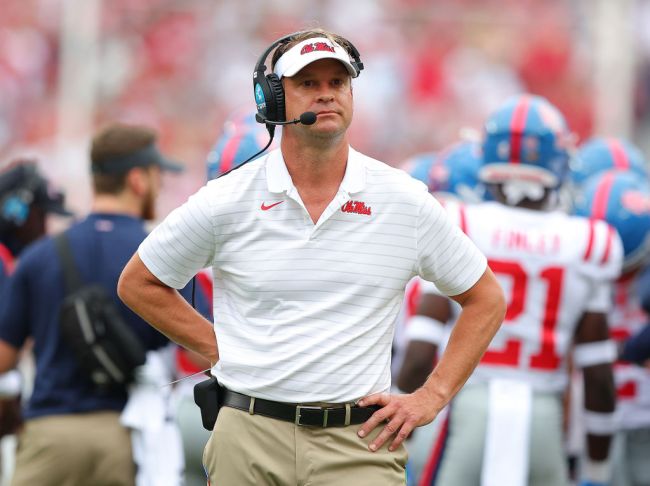 This Saturday Lane Kiffin makes his first trip back to Neyland Stadium as an opposing head coach as his Ole Miss Rebels travel to Knoxville to take on Tennessee. While Kiffin has coached inside Neyland as an assistant coach since leaving Tennessee after just one season, this Saturday’s matchup has just a bit more juice to it given his head coach status and Ole Miss coming to town as a Top 20 team.

While the matchup between the Vols and Rebels should be an absolute shootout, many college football fans are interested in Kiffin coming back to town.

Tennessee was Kiffin’s first head coaching job back in 2009, but he left to take the USC head coaching job after going 7-6 in Knoxville. USC was handed serious NCAA penalties upon his arrival, and with that, he was asked whether he thought that it was a mistake for him to leave Tennessee after just one season during the SEC teleconference this week.

“I don’t think of it that way,” Kiffin said, according to Vols Wire. “We didn’t know what was going to happen. We went there, and being told by the powers there, that the Reggie Bush situation, there’s nothing to it, best case scenario, slap on wrist. Then all of the sudden, we go there, put a staff together, start recruiting and we get a two-year bowl ban, thirty scholarships, which is well known, but think about you go in, in your first year all your juniors and seniors can transfer with no penalty. They can just leave. They can go take visits, they can do whatever. They’re not going to be able to play in a bowl for two years. It’s hard to keep them.

“You’d think very hard to recruit when kids can’t go play in bowl games, and we sign the No. 1 class in the country, loading up before the number took their hit. There’s no way to know that, so I don’t sit there and say we should have stayed because we didn’t know that. I like to live in the positive and say, had those numbers not happened, it would have been a totally different story of results on the field. I know that.”

Kiffin spent three and a half seasons coaching the Trojans before being fired in the middle of the 2013 campaign. He ultimately posted a 28-15 record as the man in charge of USC.