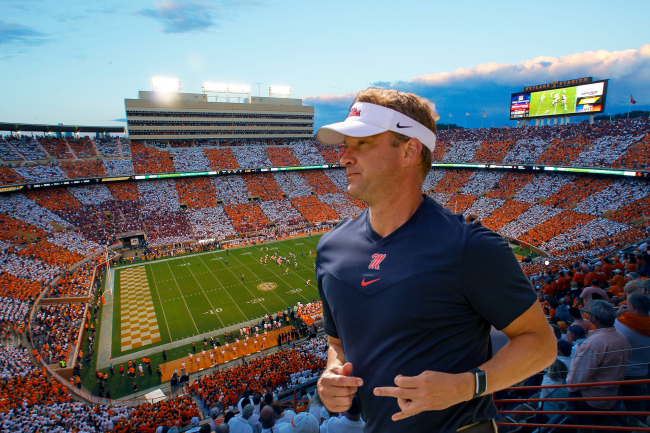 More than a decade ago, Lane Kiffin was the head coach at the University of Tennessee. He knows just how loud that Neyland Stadium can get for a night game, let alone a night game against a top-15 team, coached by a coach that left them after just one season.

You see, Kiffin is making his return to Knoxville as a head coach for the first time since 2009 this weekend.

After a short stint with the Raiders, Kiffin was hired to be the head coach of the Volunteers. However, when the Southern California opening became available in 2010, Kiffin jumped ship and joined the Trojans.

After the news was announced, Tennessee fans labeled him a “traitor,” ran to the football stadium and rioted in the streets. Just look at how lame:

Since that day, Kiffin has coached at USC, was the offensive coordinator at Alabama, the head coach at FAU and is now the second-year head coach at Ole Miss. When he was with the Crimson Tide in 2016, Kiffin made his first trip back to Neyland since his departure from the program and won the game by 38.

After the game, he flipped his visor to the vitriolic crowd.

Now, as the head coach of the Rebels, Kiffin is set to go back into Neyland for the first time since 2016 and first time as a head coach. It is the university’s first true sell-out in nearly four years and the school is bringing back its legendary “Checker Neyland” color scheme.

To make things even more interesting, Tennessee is coming off of two in-conference blowouts and fans of the program (who are forever delusional) believe that first-year head coach Josh Heupel and his offense has finally clicked. Kiffin knows what the combination of factors means for the challenge that his team faces.

He also knows just how loud it will be on Saturday night and he is preparing his team accordingly. In hilarious fashion, the 46-year-old has turned his team’s practice facility speakers up to 11 and put Tennessee’s “Rocky Top” anthem on repeat.

There is no one who knows how to troll an opponent quite like Kiffin, but in this case, it is actually a practical way of getting his program in the right mindset. Neyland Stadium is going to be electric and hostile on Saturday, and Rocky Top is a big part of that.

By putting the song on repeat, it will not only be a an anger-inspiring, motivating factor for the Rebels, but they will be numb to the noise.