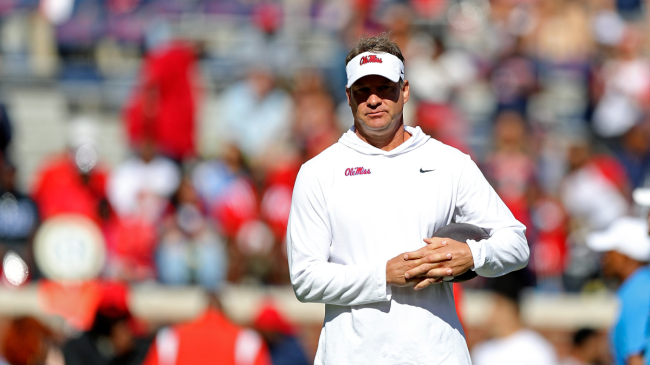 The Nebraska Cornhuskers are in the market for a new head football coach. The program fired Scott Frost after just three games in 2022 with the team limping out to a 1-2 start.

That start included losses to lowly Northwestern, who hasn’t won a game since, as well as Sunbelt member Georgia Southern. The donors and fanbase were so frustrated with the start that the school opted to spend an extra $7.5M on the firing. Had they waited just three weeks longer, Frost’s buyout would’ve been cut in half.

It was nothing new for Husker fans, as they’d watch this scene play out before. Frost went just 16-31 over his four seasons (and some change) in Lincoln, posting losing records in each. Nebraska looks well on its way to another sub-.500 mark this year.

That won’t keep fans from expecting the nation’s top coaches to consider Nebraska as their next destination. Flight tracking season is in full swing, and a prominent SEC name has been thrown in the mix.

Kiffin is known for his job-hopping past, once bouncing from positions with the Raiders, Vols, and USC Trojans over a four-year period. But that’s calmed down a bit since going through Nick Saban’s “Coaching Rehab Program” and regaining his status as a head coach.

And he’s got something going in Oxford with the Ole Miss Rebels.

Through two and a half seasons, he’s posted a 22-8 overall record. That includes winning 10 games last year and getting off to a perfect 7-0 start in 2022. Ole Miss is ranked in the top 10, sitting atop the SEC West standings.

He does have ties to the Lincoln area, though.

Kiffin’s dad, Monte, was a legendary coach at Nebraska before going on to a long career as an NFL defensive coordinator. Lane Kiffin was actually born in Lincoln while his father was on the Cornhuskers’ staff.

Would he come back to revive dead program?

Cornhusker fans think so after tracking a private flight from Oxford to Lincoln.

The flight has sparked up rumors about Kiffin coming to Nebraska, which seems highly unlikely given the success he’s seeing in the SEC at the moment. There are also a few higher profile positions likely to open up at the end of the year should he even consider leaving Oxford. Auburn comes to mind.

There’s also the minor detail of not actually knowing if Kiffin was on the flight. In fact, some in the SEC world are directly disputing that assumption.

Saw a couple trolls reporting Lane Kiffin was visiting Nebraska today. I can confirm this is false. A source in Oxford, MS spotted him at a Starbucks getting a coffee where Coach Kiffin said “hey guys, it’s me. Lane Kiffin.”

Kiffin was just the first target of flight tracking season in Lincoln. He’ll be far from the last. No matter what winds up happening, we likely won’t know who will be taking over at Nebraska until the 2022 season is done.