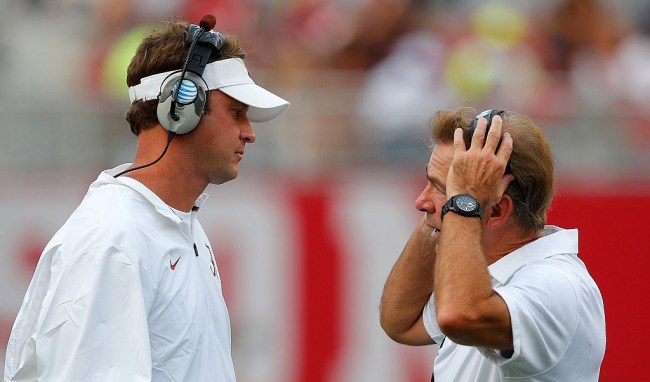 On the eve of the national championsip game Alabama head coach Nick Saban spoke to the media and had some interesting to say when asked about why he yells at his assistants on the sidelines so much.

As the press conference was winding down, one reporter brought up the topic of the Crimson Tide head coach yelling at his assistants on the sideline during games. The topic is often the delight of social media when it happens and is caught on camera but it sounds like somebody has a convenient blind spot in this area based on the answer he gave.

“I don’t yell at my assistants very much at all, I don’t think,” said Saban. “But there are occasions where you get upset with, whether it’s a circumstance in the game or a situation in the game, or maybe you did something that’s sort of out of the plan, and you get a little upset about it.”

This is obviously complete bullshit considering that Saban is constantly being shown week in and week out ripping his assistants new assholes on the sidelines even when the team is winning.

Saban’s former offensive coordinator Lane Kiffin called b.s. on his former boss on Twitter and went on to suggest that Saban is a hypocrite for asking his players to control their emotions when he’s unable to do so himself.

coach Nick Saban: “I don’t yell at my assistants very much at all…” Are these real quotes? I don't get upset at my coaches much??🤥 We tell our players to control their emotions during the game bc when emotions go up decision making goes down but…. RTR https://t.co/EurFYX2hzw

Lane is 100 percent in the right here but it doesn’t matter because Saban will probably win another national championship and people will continue to put up with him being a dick to everyone around him.