Lane Kiffin Thinks Big Ten, Pac-12 Players Should Be Able To Transfer To Schools Playing Football This Fall Without Penalty 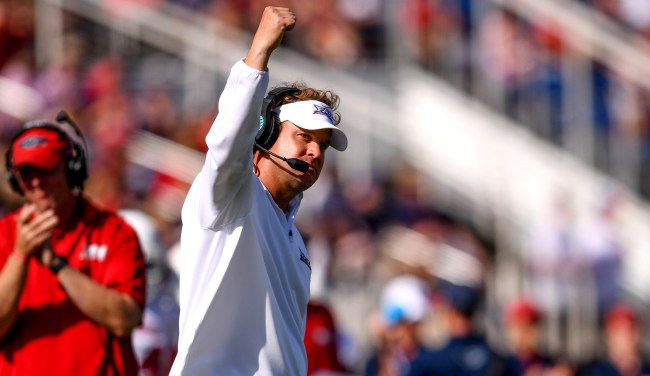 Following the news of the Big Ten and Pac-12 canceling their football seasons this fall, the attention immediately turned to what student-athletes were going to elect to do, or what they were actually going to be allowed to do when it comes to transferring. The entire NCAA transfer process and transfer portal is a mess, and with this extremely unique circumstance, it’s going to be interesting to see how the NCAA handles things.

With the SEC, ACC, and Big 12 moving forward with their seasons, it’s no secret that some Big Ten and Pac-12 players want to play football this fall and the only way to do that, right now at least, would be to transfer.

The situation is still up in the air, but Lane Kiffin has an idea and that is to allow players to transfer where they want without any sort of penalty. It’s certainly not the worst idea, but it would cause quite the stir in the world of college football. It’s also a nice tactic for Kiffin going into his first year as head coach at Ole Miss, opening your arms to players that want to come play for you is never a bad move.

Kiffin appeared on SEC Network and explained that it’s a shame that some players simply don’t have the ability to play this fall.

“Kids are having their schools or their conferences deciding to shut down, so they can’t play, and a lot of them have a lot of money on the line with the next level, or they just want to play their last year,” Kiffin said, per ESPN. “So it’s really unfortunate that the NCAA is not allowing them to transfer and be eligible immediately. We’re being told that won’t even go into a waiver process, so I feel really bad for those kids. It’s not their fault. Why can’t they come play somewhere? That doesn’t make any sense to me.”

The SEC, ACC, and Big 12 are all scheduled to start their seasons on Sept. 26. Meanwhile, the Big Ten and Pac-12 are in a PR nightmare as long as the three other Power 5 conferences are moving toward playing football this fall.

Related: Lane Kiffin’s Idea For Ole Miss To Practice Less Than Other Teams Is Genius