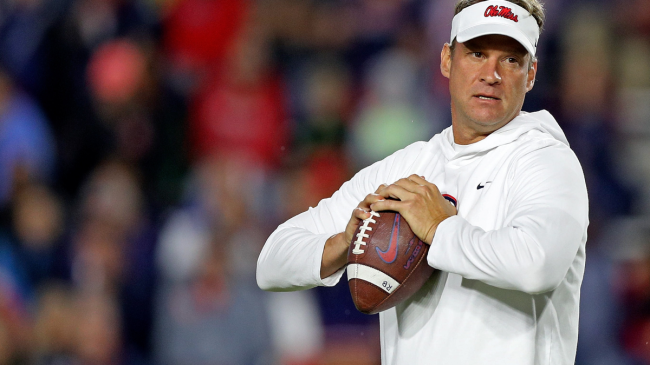 Lane Kiffin is back to being a Twitter villain. The Ole Miss head coach was seen posting a petty response after losing a four-star recruit to Maryland on signing day.

The Rebels had courted defensive end Neeo Avery throughout the recruiting process, but on Wednesday, he opted to sign with the Terps.

Avery had actually committed to play in Oxford back in the summer but backed off that commitment earlier this month. The 6-foot-5 pass rusher, who hails from the Free State, opted instead to stay home and sign with the instate program. It’s a huge get for Mike Locksley and Co. as they continue to build a foundation in College Park.

Maryland will get a talented edge defender who ranks as a top 350 player in this year’s class. The addition helped boost the Terps’ most recent cycle up to 34th in the national rankings.

Here’s what 24/7 Sports had to say about Avery in his recruiting profile.

Verified size with ideal frame for edge rusher… Has wingspan of 78 inches. Clocked a 4.6 in the 40. Quick twitched and fires off well at snap… Length and athleticism allows him to excel in space… Multi-year starter at high-level program. Mid-round NFL draft potential.

But Maryland’s gain was Ole Miss’s loss. And Lane Kiffin didn’t seem too pleased about losing the pledge.

After the flip to the Terrapins, the head coach took a shot at the Maryland program with a petty post. Kiffin retweeted a message Maryland assistant coach Elijah Brooks from earlier this year.

The original post shows an emptying Maryland Stadium with the videoboard flashing “Bowl Game Eligible” after the team’s sixth win of the year.

The Terrapins won seven games this year, the program’s most in a regular season in nearly a decade. After a 6-2 start, though, they lost three of their final four games. Still, there appears to be momentum surrounding the football team.

Now, Maryland is far from a college football power. The Terps have posted just three winning seasons since joining the Big Ten back in 2014 and haven’t really been relevant in the grand scheme of things since a 10-win campaign back in 2003.

Ole Miss, meanwhile, went to the Sugar Bowl last year under Kiffin and won eight games this season. I guess he’s letting Avery know what he’s walking into, though the Rebels haven’t been that much more relevant over the last handful of years.

Lane Kiffin’s actually not the only SEC coach that took a shot at Maryland on NSD, as South Carolina’s Shane Beamer took a subtle jab at the team’s lowly attendance (66th in the nation) after beating out the Terps for a recruit Wednesday.

Maryland is making some noise on the trail, and it appears to be ruffling some feathers in the process. Lane Kiffin was the victim of the program’s success this week, but he might not be the last.