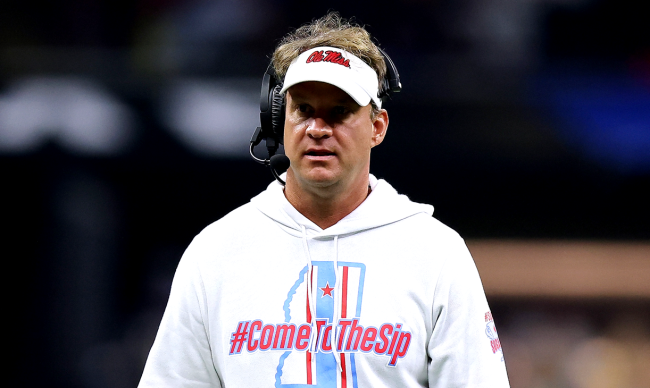 Lane Kiffin is three things: a very good college football coach, an even better troll on social media, and from most appearances, an overall pretty good dude.

On some occasions, Kiffin even manages to combine two or more of those attributes into one setting, especially if it in any way could present a recruiting opportunity for his Ole Miss Rebels squad.

Such was the case this past weekend when he joined a few dozen high school couples in Oxford, Mississippi to take some group pictures by the pool.

“Have an amazing prom neighborhood!!! @OxfordHighSch⁩ #ComeToTheSip,” Kiffin tweeted out to his 546 thousand followers.

Kiffin also took a group photo with the guys, using the same tags.

Unfortunately, the school Kiffin tagged, @OxfordHighSch, leads one to the Twitter page of the oldest girls’ high school in Oxford… England.

Even with Lane Kiffin’s little social media faux pas, tagging the wrong high school (in the wrong country), one still has to admit the these kids’ prom photos are rather epic, as are the dozens of hilarious comments they elicited thanks to the Ole Miss coach’s presence in them.

Mississippi barber shops only have 1 hairstyle to choose from

Nah, but he’s at least one of the girls’ daddy.

This is the most Mississippi thing ever

As injury prone as everyone is around Lane, I’m just thankful there were no injuries and everyone was able to stand up! Thoughts and prayers to all of the injured in Oxford! 🙏🏻🙏🏻🙏🏻