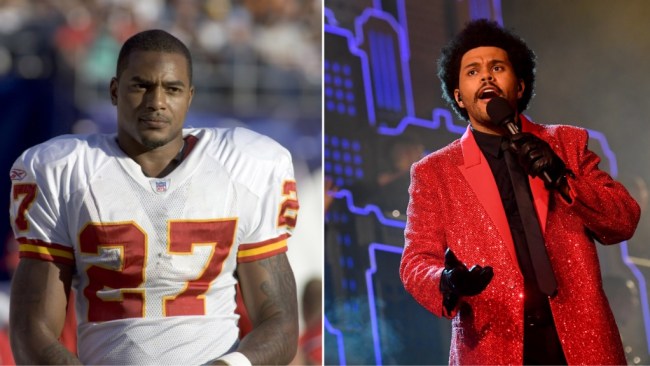 Former Kansas City Chiefs running back Larry Johnson has one of the most bizarre Twitter accounts on the social media app.

The former NFL great has gone viral several times after going on absolutely bizarre rants where he’s accused LeBron James of committing a satanic blood sacrifice with Kobe Bryant to win a championship, claiming the NFL is scripted and saying Tom Brady is a part of the occult.

During Sunday’s Super Bowl went off on another wild rant where he claims The Weeknd, whose real name is Abel Tesfaye, performed a satanic ritual on live TV during the Super Bowl halftime show.

Satan’s fall from heaven w/ his fallen angels, and Abaddon/Abel, coming from out of the bottomless pit.

It’s like they know the Bible well enough to tell you what parts they enter in at and they stop just before the part where they lose. Haha.

…fall for this preplanned anthem dispute by 2 puppets rocking in a trance.
pic.twitter.com/Nqtw0Kb0Dq

“…children of a sorceress…Who are you mocking?…at whom do you sneer and stick out your tongue?

You burn with lust…; you sacrifice your children in the ravines…” – Isaiah 57:3

All Satanists are familiar with the : ‘All Mocking Tongue’
pic.twitter.com/yFVOacgWjJ