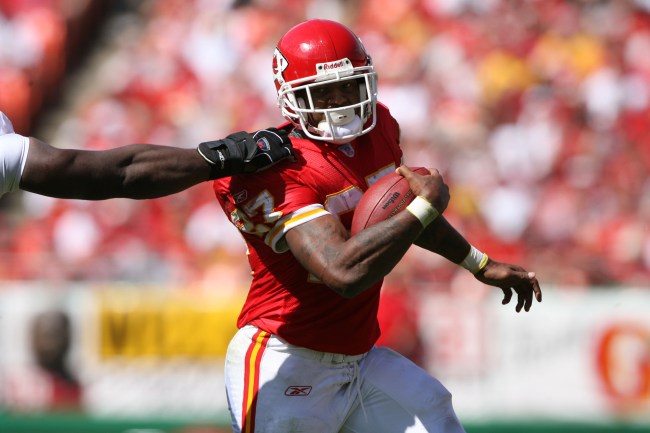 I remember playing Madden about 15 years ago and absolutely crushing with Larry Johnson as my running back. Fast-forward to today and the former Kansas City Chiefs star seems like all those bulldozing hits he delivered on defenders may have left a few wires loose in his head — because ol’ dude has been known to go on one on his Twitter account.

From wild conspiracies about LeBron James’ latest NBA title, to his paranoia surrounding Charles Barkley’s coronavirus test months ago, Johnson just seems to be all about delivering strange theories these days. And because it’s sort of become his M.O. to share his messed up views and opinions on stuff, you just knew it was only a matter of time until he dropped some more ideas of his on the world.

Well, Larry Johnson did just that on Friday, as he echoed a previous theory from another former NFL running back about NFL games being rigged. Just take a look below at what Johnson had to share.

At the end of every game:

I kept getting called crazy, so it’s apparent you sheeple accept the reality in which you are presented.
(Truman Show) https://t.co/1DabEynphm

Satan is not after your Talent, he’s after your Influence… pic.twitter.com/zWIRZB2zGY

For a little reference, Larry Johnson’s agreeing with the aforementioned Benny Cunningham, who talked in April about how he believed NFL games are rigged. But, man, leave it to LJ to take things to the next level by presenting all of these weird reasons, and then try to support them as fact with messed up photos. This guy really is a bit of a weirdo, guys.

Look, I know it’s commonplace for fans to be upset and complain about games being rigged after a tough loss, but Larry Johnson trying to convince the world that it’s the truth is just too much for me to handle. Unless a game is being officiated by Tim Donaghy, I’m going to go ahead and believe the result is decided fairly on the field or court of play. Let’s just stop with all these ridiculous conspiracy theories about everything on planet earth, OK?