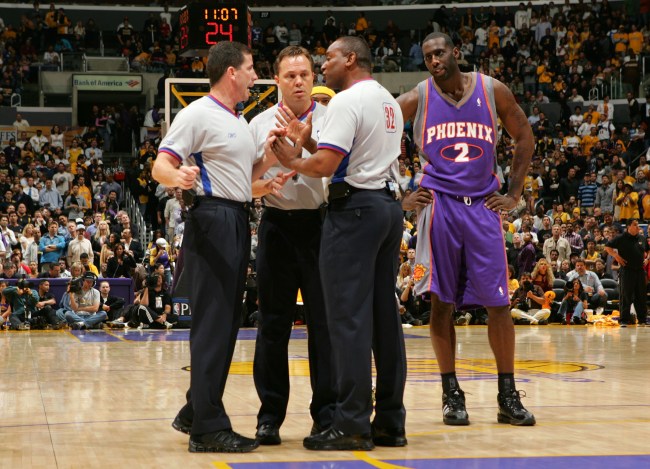 Tim Donaghy is best-known, and maybe only known, for being the NBA ref who admitted that he bet on games that he was officiating, and that he made calls affecting the point spread in those games. The practice eventually led him to federal prison, where he served 15 months after pleading guilty to two federal charges related to an investigation into the situation.

Since then, fans can’t help but wonder if there are other referees in every sport doing something similar, as some calls seem too fishy not to at least think the officials have some skin in the game. Hell, just this past week in a Monday Night Football game between the Green Bay Packers and Detroit Lions, former NFL player Desmond Howard suggested refs in the game be investigated after some questionable calls.

While it’s hard to blame refs for blowing games, it is something that has clearly happened in the past, as Tim Donaghy’s situation proved. And, just when sports fans want to think the games are pure and fairly called, Donaghy came out and admitted that the 2007 Western Conference Finals between the San Antonio Spurs and Phoenix Suns was rigged because of a strong dislike for Suns owner Robert Sarver.

Speaking to Arizona Sports 98.7 FM, here’s what Tim Donaghy had to say about the situation, which he said was influenced from one of the group supervisors on the series, Tommy Nunez.

“Obviously, everybody knows I refereed one of those famous games with the San Antonio Spurs where [the Suns] were definitely the better team in that series and San Antonio went on to win that series,” he said, via Arizona Sports 98.7 FM.

“Tommy Nunez, who was the group supervisor at that time for that series, didn’t like Sarver, who was the owner of the Suns at that time, and was always pointing out in the tape sessions of things to call against Phoenix and things not to concentrate on against San Antonio. And I think it put San Antonio at an advantage.”

If true, this is definitely shocking info. Sure, everyone knew Tim Donaghy had already served time for betting on and skewing outcomes of NBA games — which includes some big-time contests in Conference Finals’ — but to add Nunez’s name here goes to show that more NBA officials could have done something similar. Of course, this is just Donaghy’s opinion, so who knows the validity of the comments.

Refs are human and are going to miss calls or see plays differently depending on angles and all that stuff, but, if you go back and look at the tape from the 2007 Western Conference Finals between the San Antonio Spurs and Phoenix Suns, it’s clear that, particularly in Game 3, there seemed to be some favorable whistles for San Antonio. Unfortunately, unless refs are replaced by AI or increased technology, there’s no way to really eliminate any questions about refs throwing games.