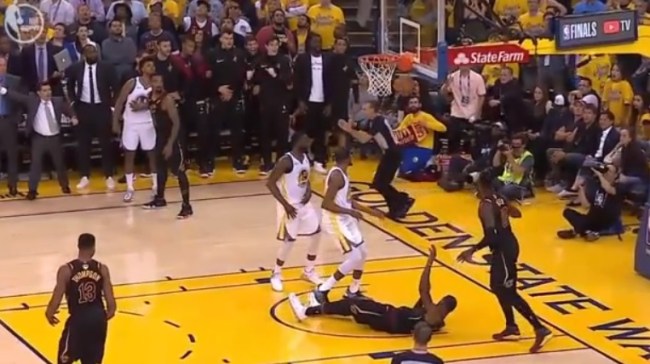 The most controversial play from game 1 of the NBA finals occurred late in the fourth quarter when LeBron James attempted to draw a charge on Kevin Durant but was called for a blocking foul.

One ref, Kenny Mauer, initially called it a charge while his colleague Tony Brothers appeared to disagree and signaled for a blocking foul.

According to disgraced former referee Tim Donaghy an NBA rule dictates that when refs disagree on a foul call they have to field a jump ball at center court.

Donaghy said that officials should not have awarded the Warriors the ball after their controversial decision to overturn a charge called on Kevin Durant. Instead, citing a rule on Page 47 of the NBA Rule Book, he said officials should have held a jump ball at the center circle.

The rule Donaghy is referring to falls under Rule 12, in a section on Double Fouls. It states:

If a double foul occurs as a result of a difference in opinion by the officials, no points can be scored and play shall resume with a jump ball at the center circle between any two opponents in the game at that time. No substitute may participate in the jump ball.

Clearly Brothers called a block, Kenny Mauer called a charge, and they had a difference of opinion,” Donaghy said. “So, by rule, there should have been a jump ball at the center circle between any two opponents that were in the game at the time.

“To me, they kicked the rule.”

According to @NBA rules. A charge overturned to a block by replay is a jump ball and not two shots. Thus, the Cavs should PROTEST Game 1 to the league office now.

It’s not clear whether there were two different calls on the court which would have triggered rule 12.

According to referee Kenny Mauer they initially weren’t sure whether LeBron was in the restricted or not which is the reason they chose to go to replay.

“The reason for the trigger is that we had doubt as to whether or not James was in the restricted area. When over at the table, we then are allowed to determine whether or not he was in a legal guarding position.

“It was determined he was out of the restricted area, but he was not in legal guarding position prior to Durant’s separate shooting motion. So we had to change it to a blocking foul.”

Hopefully we get some resolution to this matter.