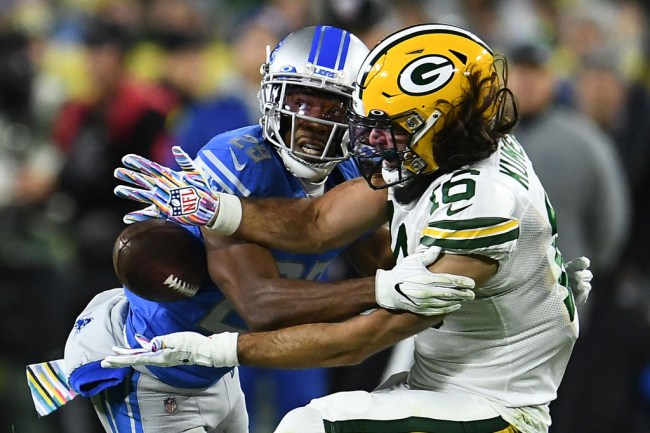 Last year, the Saints got absolutely screwed by the refs in the NFC Championship game after no flag was thrown on one of the most egregious pass interference penalties in the history of football and it appeared the NFL was taking some steps to ensure teams wouldn’t be absolutely robbed this season.

Unfortunately, this seems to be far from the case, as officiating has (for lack of a better term) been absolute ass so far thanks to a variety of factors, including the apparent inability of referees to overturn missed calls out of what seems to be sheer stubbornness.

On Monday night, the Lions saw themselves fall victim to some horrendous officiating on multiple occasions. In the first half, the refs turned a blind eye to the fact that the Packers had 13 men on the field but they were just getting started.

Packers really had 13 men on the field and didn't get a penalty??

Asking for the Lions…. pic.twitter.com/b6ybODhTmc

In the fourth quarter, Trey Flowers was flagged for a ridiculous hands to the face penalty that would allow the Packers to extend a drive that would eventually result in a touchdown.

Flowers would find himself on the receiving end of the same call later in the quarter—a call that would set up Green Bay to kick what would be the game-winning field goal.

Flowers wasn’t shy about letting his feelings known after the game and plenty of other people chimed in—including Barry Sanders, who was not happy his former team got royally screwed over.

Desmond Howard was in the same boat, as the analyst hopped on Twitter to suggest the refs had a financial stake in handing the Packers the game.

The refs need to be investigated. This is horrendous. Check bank accounts. #NoExcuses

Sure, it may be a bit conspiratorial but it doesn’t actually sound as far-fetched as it seems when you consider just how incompetent the refs were.

I’m sure the NFL will take the appropriate steps to discipline the people responsible aaaaaaand who and I kidding? They’re not going to do jack shit.