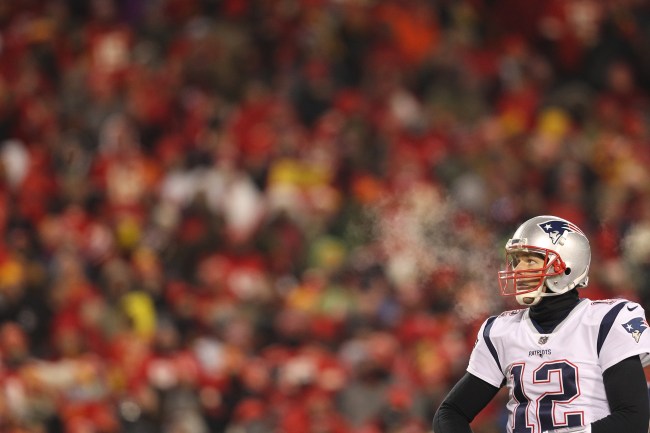 The NFL is investigating the possibility of a Chiefs fan using a green-tinted laser pointer to obscure the vision of Tom Brady during Sunday night’s AFC Championship game at Arrowhead Stadium.

Video footage posted to Twitter by KMBC reporter William Joy show the green light bouncing off the face and upper body of Brady during key moments of the game, including the fourth quarter interception by Chiefs’ Daniel Sorensen.

Our photographer, Turner Twyman, caught someone pointing what appears to be a laser pointer in Tom Brady's face last night. Play between the "muff" that wasn't and Sorensen int. @NFL, @Patriots and @Chiefs all told me they weren't aware of the incident. pic.twitter.com/ejWBQ6i64C

We found it one other time on the deep pass to Gronk in the 4th that set up the go-ahead TD. The NFL has a video of a similar identical incident two years ago: https://t.co/ut217aEhjt

It happened one other time that we've seen on a pass to Hogan. #Chiefs #Patriots pic.twitter.com/27QkYf0m9P

Brian McCarthy, NFL vice president of communications, told the Boston Herald the league is “looking into the report of the laser beam” and NFL security is looking into it.

“It didn’t affect the game, as far as we know,” McCarthy added.

“We’ve had some issues of lasers around the airport, but not at the stadium. We will investigate, though, if we receive a police report.”

Mind you, Becchina was at the game rooting for his Chiefs, so I wouldn’t expect him to prioritize the complaint.

The New England Patriots declined to comment, but said they are aware of the situation.

Back in 2013, Dr. Robert Josephburg, an ophthalmologist and retina specialist at the Westchester Medical Center in Valhalla, N.Y.,  warned Congress that swift action is needed to eliminate the usage of laser pens at sporting events, as high-powered laser pens can cause permanent blindness. The complaint came days after Cristiano Ronaldo and Lionel Messi were both targeted by opposing fans during a pair of matches between Real Madrid and Barcelona. Fans continue to do so.

As if he didn't already have enough to deal with, Lionel Messi was targeted by a laser pen: http://t.co/Q8uiw0P1va pic.twitter.com/5VS2pRi4IT

All’s well that ends well, but can you imagine if Tom Brady attributed his interception to being temporarily blinded by a fan. As if the NFL needed any more drama right now.