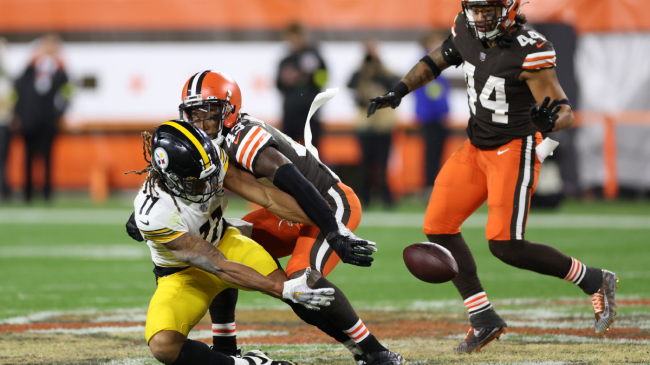 The last play of the Browns-Steelers game on Thursday night cost a lot of sports bettors a lot of dough.

With Pittsburgh trailing by six points deep in their own territory, they did what most teams would do. Try a trick play. To gamblers, these plays can be dangerous, though. And this one proved to be just that.

After tossing a quick out route, a few Steelers lateraled the ball around which eventually resulted in a fumble. That fumble was recovered by the Browns in the endzone, giving Cleveland a touchdown.

It ruined the nights of many who’d placed wagers on the game.

Last play of Steelers and Browns game was costly

There were a variety of bad beats coming on that costly final play. First, the over/under on the matchup opened at 40.5 points. The game appeared as though it was bound to end on 40 points with the score sitting at 23-17.

The touchdown forced the over, the unpopular play among most sharp bettors, which is why it fell to 38 points before kickoff.

“That may be meaningful to some of you….” Al Michaels, legend, talking to those who had the under on 40.5 from earlier in the week…. #badbeat #damn

Digging deeper, it also blew any teasers that had been placed on the Steelers, who entered as five-point underdogs. A six-point tease on that line moved it to +11. The final score would end at 29-17.

There was a popular prop bet affected that may be the most brutal beat of them all. Pittsburgh receiver Chase Claypool’s total receiving yards was posted at 35.5 yards. He had 41 yards going into that final play. Despite not being the original receiver of the pass, and not being the last one to touch the ball, he was credited with a negative six-yard play.

His receiving total ended on 35 yards.

Before this play: 41 rec yds

What a brutal beat 😭 😭pic.twitter.com/ojH2UtS71n

For me, I had Najee Harris on my fantasy team, who just happened to be the last Steelers player to touch the ball on the play. He was docked a couple of points for a fumble, but so long as I don’t lose a close matchup, I won’t be upset as most of the betting world is tonight.