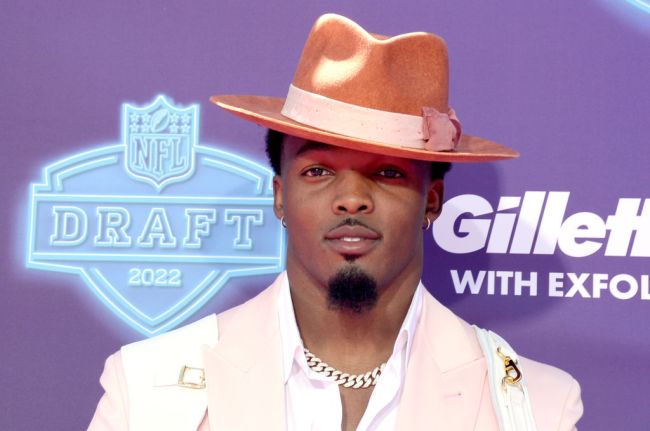 While the quarterbacks in this year’s NFL Draft class stole the headlines with their surprising tumbles past round two, there was one player whose drop down the draft board was even more shocking.

Nakobe Dean was projected as a mid-first round pick heading into the draft and was even in attendance in Las Vegas. Then his name surprisingly wasn’t called on Day 1.

A drop into Round 2 wasn’t necessarily cause for alarm in a draft that didn’t go as expected throughout the first round, however, Day 2 was shocking. Dean still didn’t hear his name called in Round 2 as he watched 6 other linebackers come off the board. Still there was no explanation.

At some point on Day 2, a report surfaced that Dean may have a torn pectoral, which could have been what was causing him to slip in the draft.

Eventually, Dean’s fall was halted when the Philadelphia Eagles selected him with the 83rd pick in the draft. After that pick was made, Dean told reporters that the injury rumors were false and he isn’t actually expected to miss any time.

Nakobe Dean: “I’m healthy and ready to go. Camp starts next week and I expect to be a full participant.”

If Dean is expecting to be available for camp next week then it is truly unbelievable that he fell all the way into the third round. Even if the expectation was that he would miss some time, it’s still difficult to understand how he dropped so far down draft boards.

David Ojabo tore his achilles at his Pro Day and was still selected with the 13th pick of Round 2. That’s somebody we know will be unavailable for quite some time and he still only fell a round.

Landing Dean with the 83rd pick in the NFL Draft was an absolute steal regardless of his injury status, but if he’s available any time before the start of next season then the Eagles probably made one of the best picks in the draft.

Dean racked up 168 tackles in his 3 seasons at Georgia, including 10.5 tackles for loss and 6 sacks last season. He helped turn Georgia into the nation’s best defense last season en route to winning the national title.

Now, Dean will team up with defensive tackle Jordan Davis as they look to have the same impact on the Eagles that they did on the Bulldogs.