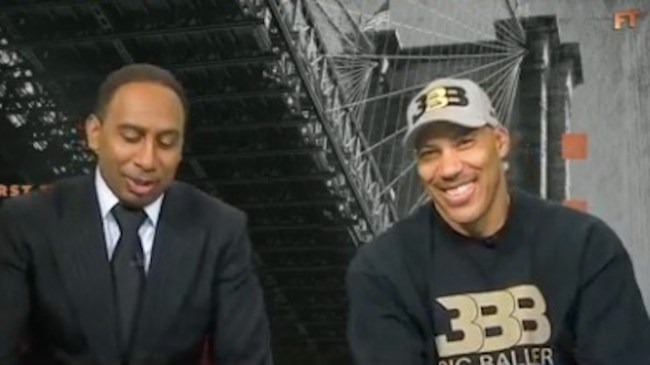 Following this weekend’s long-awaited megatrade between the Los Angeles Lakers and New Orleans Pelicans for Anthony Davis, you knew it was only a matter of time until LaVar Ball’s dumb round head made an appearance on ESPN, specifically, First Take.

And first thing on Monday morning, ESPN delivered exactly what nobody asked for: LaVar Ball’s opinion of the trade that saw his overrated son Lonzo Ball be shipped from the league’s most glamorous team to a franchise with a Pelican as their mascot (no disrespect to the fine city of New Orleans, of course).

Clearly learning nothing from his previous antics — which has turned his son into one of the league’s most publicly derided players — LaVar, 51, took his toothy grin to First Take to make the clearly asinine claim that it was HIS mastermind plan that led to Lonzo being shipped to The Smoothie King Center.

At this point, Ball’s public appearances are similar to watching a train wreck, as seeing a grown man prioritize his need for attention over the public perception of his son is profoundly sad to watch, yet you can’t seem to look away.

“To me, I don’t do nothing wrong,” Ball says as Stephen A. Smith later questions him about his decision making over the course of the last few years, including the choice to pull his two younger sons out of school.

Then, to add further pressure to his son (who is currently injured), Ball then predicted that Lonzo would be an All-Star during his first season in New Orleans.

While I — like most people — can’t stand LaVar Ball, I do feel quite sorry for his three innocent sons, as their father’s unhealthy desire for the spotlight has come at the expense of their careers.