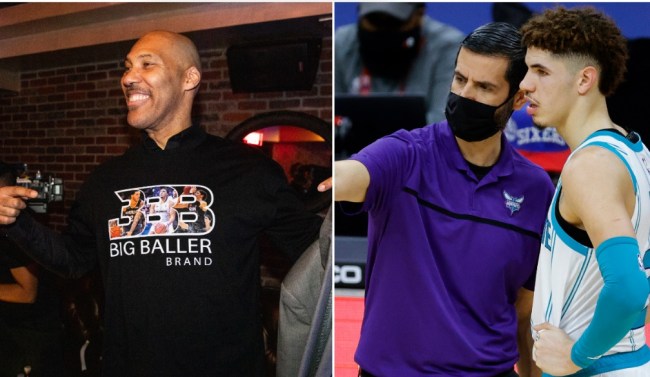 LaVar Ball is at it again.

On Friday, Hornets rookie LaMelo Ball only played 16 minutes in the team’s loss to the Chicago Bulls. The team’s head coach James Borrego said he decided to sit LaMelo for long stretches of the game because he was turning the ball over at a rapid clip.

“If you’re turning the ball over five times in 16 minutes, that ain’t gonna cut it for me,” “If you’re doing that on the offensive end, you better be bringing something defensively.

“… He had a stretch where he played extremely well. We need to find that again. He’s got to get better, bottom line. He’s engaged, he wants to get better. He’s capable of handling it.”

On Saturday afternoon LaMelo’s father, LaVar, fired back by saying his son isn’t happy coming off the bench and he blames coach Borrego for not having a “killer mindset.”

“My thing is he ain’t happy with that, but he ain’t go show that,” Ball tells us. “If I train you to be the best and always been starting all your life — here is what they don’t get. My boys are not freakin’ role players! They superstars! Let them do what they do!”

LaVar points out Melo could be held back due to Hornets coach James Borrego not having that — oh, how should we say this — Big Baller frame of mind.

“But, if your mentality ain’t like that, guess what? It’s hard to coach my boys and tap into the best because you don’t have a killer mindset.”

It was only a matter of time until LaVar started beefing with the Hornets head coach.