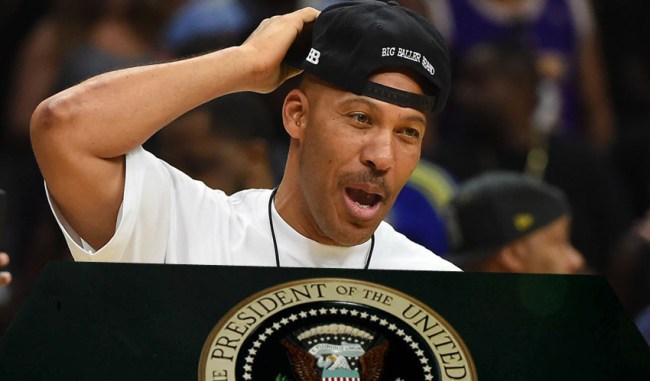 LaVar Ball has certainly been able to accomplish a lot in a very short period of time. Prior to March of 2017 and the NCAA basketball tournament we hadn’t written a single thing about the man and yet here we are.

Then he claimed he could beat Michael Jordan in a game of one-on-one…in his prime, got into a beef with LeBron James about his kids, introduced his own ridiculously expensive line of shoes, got into a beef with Shaq about his son, and got his son Lonzo drafted second by the Los Angeles Lakers. And that’s only a taste of all the things Ball has done in the last seven months.

So given that fact, and LaVar Ball’s willingness to bluster his way to whatever he wants, why shouldn’t he run for President in 2020. I mean, Donald Trump got elected and who saw that coming three years ago?

Then again, based on the reactions to this tweet, perhaps the odds will move more in the direction I was expecting…

A bet is probably a better investment than buying the shoes.

He may have a point there.

Lavar Ball has better odds to be president than the browns do to win the Super Bowl https://t.co/cF9gCDpEYc