Do me a favor: take a good long look at this photo and ignore the conflicting thoughts about your sexuality for a second and just study this majestic specimen. The curves, the crevices, the pink parachute around his waist.

Say what you will about LaVar Ball, but don’t you dare say that if we hopped in a time machine back to 1987, we all wouldn’t have Ball half-brothers. Translation: LaVar Ball would have boned all of our mothers. Just to nail that point home, I texted my mother, who has no preconceived notions about Mr. Ball, if she’d risk it all for the man who could allegedly probably reportedly beat Michael Jordan in a game of one-on-one.

Her response was frightening: 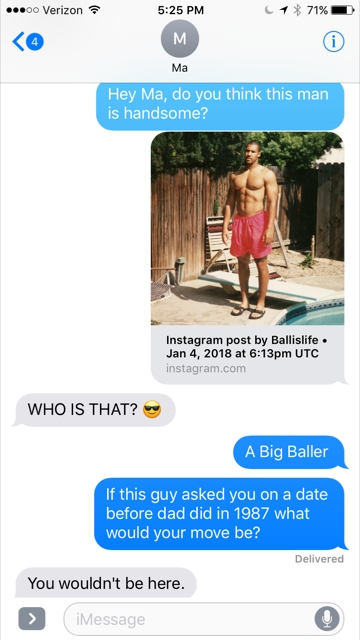 If you’ve suddenly gained the ability to turn on a computer, type a website into an internet search bar, and have stumbled across this blog post, I hope this finds you well.

I know it’s tough, dad, and I definitely wouldn’t want to be in your shoes. Because I’d much rather be in a pair of BBB ZO2 Prime’s. You must know, however, that I’ve appreciate all you’ve done for me over the past 30 years. But, LaVar can take it from here.