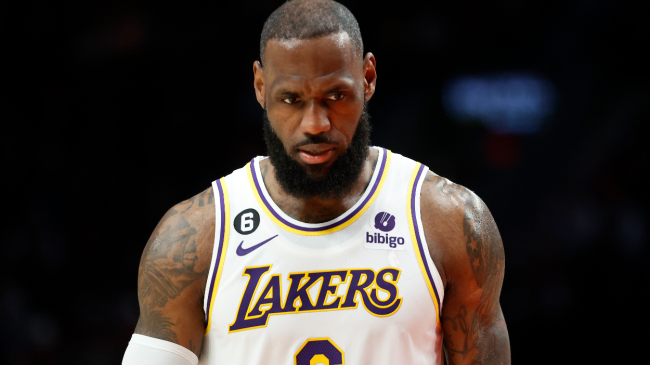 LeBron James wasn’t happy with one fan in attendance at his latest game. He had to be held back by security from going after the heckler.

James’s reaction to the criticism is now going viral on social media.

During the Lakers’ blowout loss to the crosstown Clippers on Tuesday, a fan filmed LeBron heading to the locker room. While watching the superstar walk off the court, he then began slinging insults.

One had to do with James’s receding hairline, which seemed to flip a switch. Take a look at the clip below.

Bron wanted all of the smoke pic.twitter.com/T0uV5IiIdy

The TikTok user who goes by the name @ruthlessrich certainly lived up to his name. He berated the Lakers’ star with disrespect, which eventually got a rise out of LeBron.

“Hey LeBron, you better get this s— together. With that receding a– hairline. Look, he’s mad. Look at him!”

James then turned to confront the fan, but was ushered off by security before the incident escalated. Many on social media were quick to respond to the now viral video.

One person said, “He spittin’ facts,” but most took LeBron’s side.

I despise those type of people. They know lebron cant do anything in those circumstances so they see it as a opportunity to do this.

Most called the heckler a “clout chaser” looking for internet fame. Others wondered what he’d do if LeBron came to yell at him in his workplace.

LeBron didn’t let the criticism get to him on the court. The forward went off for 46 points while connecting on nine three-pointers. Unfortunately, it came in a losing effort.