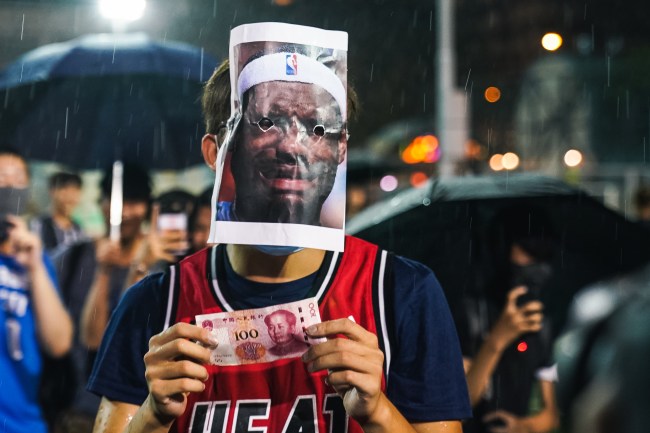 LeBron James obviously did not do the reading before presenting to the class. That’s fine, they used to call me Mr. Sparknotes in college. But, unlike LeBron, I would never throw a classmate under the bus for his perceived laziness.

And LeBron’s paying the price for it.

The three-time NBA champion is taking grenades right now for criticizing Houston Rockets GM Daryl Morey for being “misinformed” and selfish when he fired off a tweet two weeks ago supporting the pro-democracy Hong Kong Protests (it read “Fight for Freedom. Stand with Hong Kong.”)

In the wake of Morey’s tweet, China essentially told NBA figures to shut up and dribble, disallowing any media availability to players for the Brooklyn Nets and Los Angeles Lakers preseason game in Shanghai last Thursday and announcing that the country’s state-run television network would not be broadcasting the game in China.

So, colored with that context, LeBron’s kowtowing to a Chinese government that already made the NBA grab their ankles for speaking up against injustice is bush league. Especially when LeBron’s been a champion against these issues his entire career.

The intrepid folks of Twitter went back two years to dig up a super hypocritical tweet LBJ sent on Martin Luther King Day about being silent in the face of injustice. It did not age well.

I hope LeBron doesn’t go back and read these sub-tweets.

*offer not valid in Hong Kong

LBJ turned so quick, I guess all NBA players are good at spinning, nice job👍 pic.twitter.com/7Pg24SAa2u