Chinese Government Tells NBA To Shut Up And Dribble And, While It Makes No Sense, That’s Exactly What It’s Doing 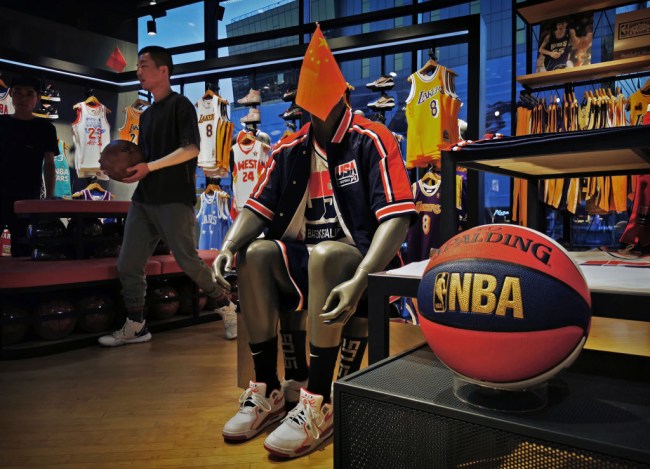 Things have not gone well between the NBA and China over the last few days. It all started when Houston Rockets GM Daryl Morey tweeted “Fight for Freedom. Stand with Hong Kong” this past weekend essentially expressing his support of major pro-democracy protests surrounding an extradition bill introduced in April.

The Brooklyn Nets and Los Angeles Lakers are playing a preseason game in Shanghai on Thursday and the Chinese government has now stepped in disallowing any media availability to players or for Adam Silver.

The Chinese government has flexed its muscle, to say the very least, and is now telling the NBA to shut up and dribble not allowing them to speak on any of the issues, period. The NBA will cut a check though, that’s for sure.

Wednesday press conferences had already been canceled prior to the Thursday’s game, NBA signage featuring LeBron James and Kyrie Irving have been taken down and on Wednesday the country’s state-run television network released a statement that NBA preseason games in China would not be broadcasted. There is however still a global feed, but that will be blocked in China.

China has straight-up bullied the NBA.

LeBron is in China right now playing in the preseason game. He had a pretty strong response to the ‘shut up and dribble’ message Laura Ingraham stated on Fox News back in February, but as communist country China literally enforces that message he’s been silent up to this point.

It appears that as long as the cash is coming in then the face of the NBA, the franchises and the commissioner literally will just shut up and dribble.

“I will not shut up and dribble… I can’t sit here and allow that to happen.”@KingJames on speaking out on social issues. pic.twitter.com/YQK97w6FVR

Silver infact put out a statement on Tuesday saying that “[the NBA] will not put itself in a position of regulating what players, employees and team owners say or will not say on these issues,” but now the NBA won’t even step near a mic.

This entire situation, especially a government telling you to keep your mouth shut and dribble your ball, goes against American values. It’s hypocritical from the NBA as well given the ‘shut and dribble’ responses last season, and with the very real issues happening in China at the moment, it’s a horrible look.

There is absolutely zero upside for these preseason games being played in China after this debacle. Literally, the only people it benefits are the people in the arena that get to maybe see some NBA superstars in-person for the first time ever in an entirely meaningless game.

The NBA’s strongest brand value was the authenticity they sold relating to their players. That authenticity is now in shambles. We’ve seen LeBron, and others, really will just shut up & dribble if you pay them enough. No matter where the cash comes from.

The Nets and Lakers will play another game in China on Saturday. There were rumors of Thursday’s game being canceled and those rumors will surely fly around again leading up to Saturday, but it’s pretty tough to imagine China allowing that to happen or the NBA cutting off that cash flow.

Saturday’s preseason game could likely be the last NBA event in China for many years to come.