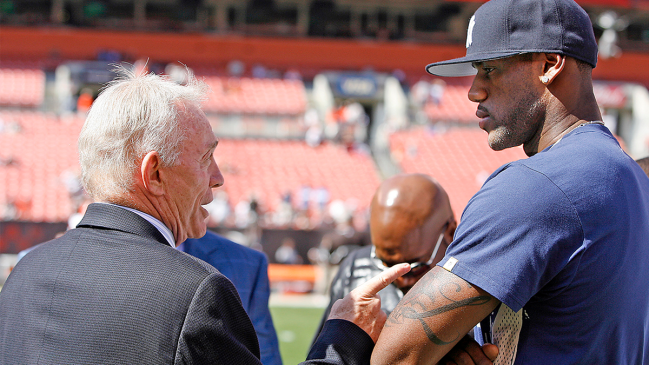 LeBron James has spent over two decades in the blinding spotlight that was first shined upon him when he was still Just A Kid From Akron playing high school basketball, and over that span, he has (for better or worse) routinely harnessed the massive platform that comes with being one of the most famous athletes on the planet to call attention to a wide variety of issues off of the court.

In addition to supporting a number of philanthropic efforts targeting underprivileged communities, James has also soundly ignored the “Shut Up And Dribble” crowd by being fairly vocal when it comes to social justice issues.

With that said, he has drawn plenty of accusations of hypocrisy for his relative silence concerning the NBA’s relationship with China and was chided by Kareem Abdul-Jabbar earlier this year for failing to fully commit to the causes he claims to support.

Following Wednesday night’s win over the Trail Blazers, LeBron opted to use his postgame press conference to address a recent controversy concerning Jerry Jones, which stems from a photo taken in 1957 that captured the Cowboys owner standing in a crowd of white teenagers attempting to block a group of Black students from entering Little Rock Central High School shortly after it was desegregated.

Jones—who was 14 years old at the time—acknowledged he was there but denied he was actively preventing the members of the “Little Rock Nine” from entering the building, saying he was merely observing out of curiosity. The picture in question has nonetheless sparked plenty of discourse concerning whether or not Jones should be given the benefit of the doubt or still be judged for something than transpired 65 years ago.

It’s not exactly a huge surprise that the topic wasn’t raised by any of the reporters who had the chance to lob questions at LeBron following the contest against Portland. However, he still managed to figure out a way to shoehorn it into the proceeding when he vocally pondered why he wasn’t asked for his opinion on the matter while attempting to link it with the recent controversy surrounding Kyrie Irving.

Here are James’ full comments. He said that if he is going to be asked about Kyrie Irving’s suspension for sharing an anti-Semitic film on his social media, James also expected to be asked about Jones. https://t.co/HI2QyjBA4F pic.twitter.com/yFLrPxTgg6

The answer seems fairly obvious, as it’s fairly easy to understand why reporters would be a bit more eager to ask LeBron about a high-profile NBA player accused of promoting antisemitic views as opposed to his thoughts on an old photo of the owner of the NFL team he roots for.

While I can understand why James might want to call more attention to the Jones’ situation, it seems like there had to be a less awkward way to raise it.