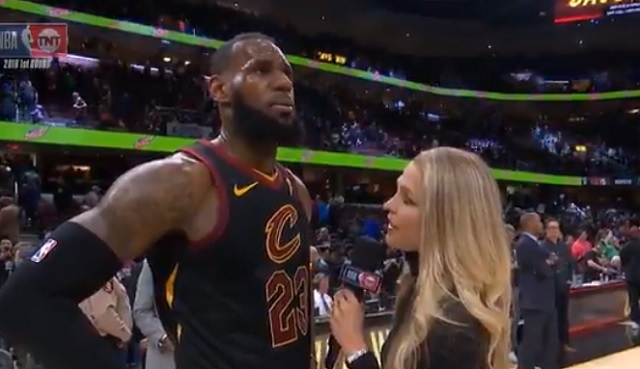 During last night’s Pacers-Cavs game, ESPN’s Adrian Wojnarowski broke the tragic news of the death of Erin Popovich, the wife of Gregg Popovich.

Erin Popovich, wife of San Antonio coach Gregg Popovich, died today, Spurs said in a release. They were married four decades. She had been ill over an extended period

Spurs GM RC Buford on the passing of Erin Popovich: “We mourn the loss of Erin. She was a strong, wonderful, kind, intelligent woman who provided love, support and humor to all of us.”

Immediately after the game was over, TNT’s sideline reporter Allie LaForce asked LeBron to comment on the tragic news of Erin’s passing.

LeBron James after the game finding out about the horrible news of Erin Popovich's passing pic.twitter.com/2hz7z2ysWp

Several people on the Internet went on to criticize LaForce for asking the question.

Never been a sideline reporter. I know its a tough gig. But dont think that was the right time to ask that question to LeBron about Gregg Popovich's wife. LeBron just finished a game. Had no idea that news/question was coming. Credit to LeBron for handling the question with class

Allie LaForce deserves to be criticized for that postgame intv w/ LeBron. Poor form for her not to ask him before going live.

After LaForce’s interview went viral LeBron broke his personal social media ban during the playoffs to clear the air and to let everyone know that she had asked him for permission to ask about the death Erin Popovich prior to going on air.

.@KingJames sends his thoughts and prayers to the family of Gregg Popovich, sets record straight on reporter’s question. pic.twitter.com/VCsFuEtFVU

On my way home from our game 2 victory I’m not on social media but I was made aware from some friends that a question was asked to me post game and a lot of people feel that I was blindsided. That is absolutely false, Allie LaForce told me that she was going to ask me the question and if it was ok. And once I started talking about it, my emotions starting to take over and that was my emotions coming straight from my heart about the late Eric Popovich.