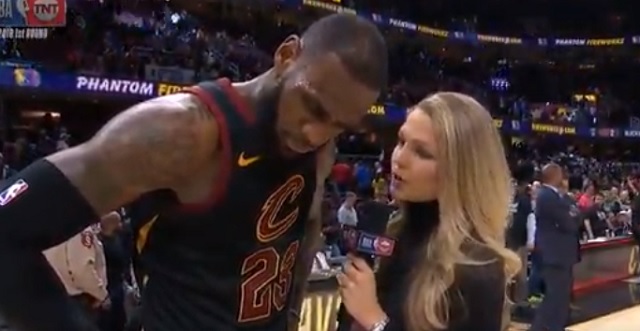 Erin Popovich, wife of San Antonio coach Gregg Popovich, died today, Spurs said in a release. They were married four decades. She had been ill over an extended period

Spurs GM RC Buford on the passing of Erin Popovich: “We mourn the loss of Erin. She was a strong, wonderful, kind, intelligent woman who provided love, support and humor to all of us.”

Immediately after today’s Pacers-Cavs game, TNT’s sideline reporter Allie LaForce asked LeBron his thoughts on the passing of Erin Popovich. LeBron, who hadn’t heard the news of Erin’s death, needed a moment to gether himself and proceeded to give a classy response.

LeBron James after the game finding out about the horrible news of Erin Popovich's passing pic.twitter.com/2hz7z2ysWp

Several people on the Internet questioned whether if was appropriate of LaForce to asked LeBron about Erin Popovich’s death immediately after the game appropriate.

Why do reporters keep putting players on the spot over the news of the death of Gregg Popovich's wife? How do they expect them to react?

I think in that situation you let someone tell LeBron that before he officially meets with media. I wouldn't spring a death on someone right after a game when you know they have no clue what happened.

Never been a sideline reporter. I know its a tough gig. But dont think that was the right time to ask that question to LeBron about Gregg Popovich's wife. LeBron just finished a game. Had no idea that news/question was coming. Credit to LeBron for handling the question with class

Allie LaForce deserves to be criticized for that postgame intv w/ LeBron. Poor form for her not to ask him before going live.

Pretty ridiculously unfair to LeBron (not to mention Gregg Popovich) to inform him and ask him to talk about Erin Popovich’s passing on live television. He handled it with absolute class, but wow that was uncool.

What in the world is Laforce doing breaking the news of Pop’s wife’s death in a postgame on court interview w lebron? So so odd

Classy and sincere answer from LeBron to a tough postgame question about the passing of Erin Popovich. Don't blame Allie LaForce for asking, but difficult spot.

Thought she asked it directly and with compassion. And LeBron James, as usual, handled it with class and thoughtfulness. Both people were pros here. James has a relationship with GP. Legit Q IMO. https://t.co/jub13b98Vb

Update: According The Atlantic’s Richard Deitsch LaForce had asked LeBron on-air if he wanted to comment on the passing of Erin Popovich

According to a Turner Sports source, Allie LaForce gave LeBron James a heads up prior to the Popovich question.

Ernie Johnson says Allie LaForce had told LeBron of Erin Popovich's death and asked him if he wanted to comment before going on-air pic.twitter.com/VBhHbuBPvJ

I personally think TNT should have probably waited until the press conference to ask the question but it’s too late now.