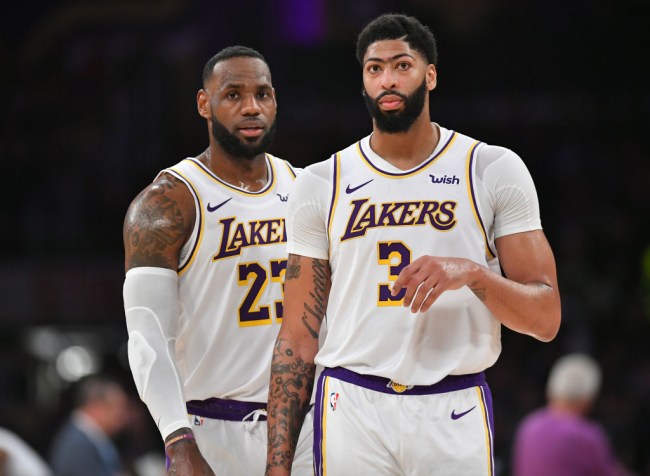 LeBron James, Anthony Davis, and Kobe Bryant will forever be linked together. Not only because the tie-in by playing for the Lakers, but also because of their relationships in the past.

Bryant took Davis under his wing at the 2012 Olympics as their relationship began and James and Bryant have seemingly been great friends since James entered the NBA.

LeBron and Davis have each paid tribute to Kobe on Instagram with heartfelt posts and now they’ve gone a more permanent route by getting thigh tattoos to remember Bryant.

The Lakers teammates had the tattoos done Wednesday by California-based artist Vanessa Aurelia, who shared videos of the work on her Instagram Story. She first posted a clip of her tattooing James’ thigh and then Davis’ thigh with Black Mamba-inspired ink.

Davis threw up a video on Instagram Stories as well during the tattooing, saying: ‘Until next time! Thanks for having me.’

The Lakers had some fun on a football field prior to practice on Thursday and you can clearly see the new tattoo on James’ left thigh. It looks to be some sort of drawing along with ‘Mamba 4 Life’ written underneath it.

The Lakers will play their first game since Bryant’s tragic death on Friday night as the Blazers visit the Staples Center. Tip-off is set for 10:30 PM EST.

It will undoubtedly be one of the most emotional nights in NBA history.