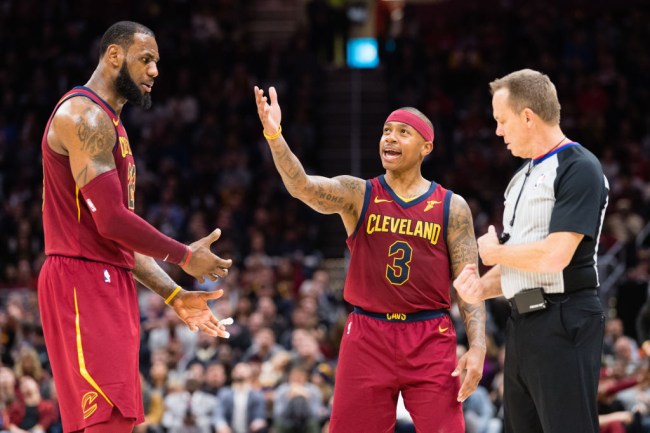 The month of January for the Cleveland Cavaliers can most aptly be defined as the spawn of the Cleveland Browns and the Real Housewives of Beverly Hills–lotta losing, lotta drama. The Cavs have lost 13 games since Christmas–including eight of their last 13–Isaiah Thomas looks flat out unhappy to be there, their defense is laughable, and Kevin Love is out six to eight weeks with a fractured left hand.

With all that considered, its time for the media to do what we do best: over-react to every move a Cavs player makes. But, given LeBron’s history of head-shakingly passive aggressive antics, the quote he recently posted on his Instagram story is likely a shot at one of his teammates *cough cough IT*.

So this just dropped on LeBron’s IG story 👀 pic.twitter.com/0REhzp8ECw

This is LeBron’s M.O. One of the greatest players to ever live is so cognizant of his legacy that when the going gets tough, his first inclination is to shoot off cryptic messages to pass the hat.

Like this one after a stretch in 2015 when Kevin Love went on a real bad stretch.

Stop trying to find a way to FIT-OUT and just FIT-IN. Be apart of something special! Just my thoughts

Or this one after Kyrie bailed for Boston:

Never let another ride your wave 🌊!!!

Hell, LBJ even got David Blatt fired during a fine season because he failed to kiss LeBron’s ass and then feigned complete ignorance and powerlessness in the whole situation.

So, am I saying LeBron James sent out that Instagram to call out Isaiah or possibly Tristan Thompson or J.R. Smith? No. Actually, yes. That’s exactly what I’m saying.