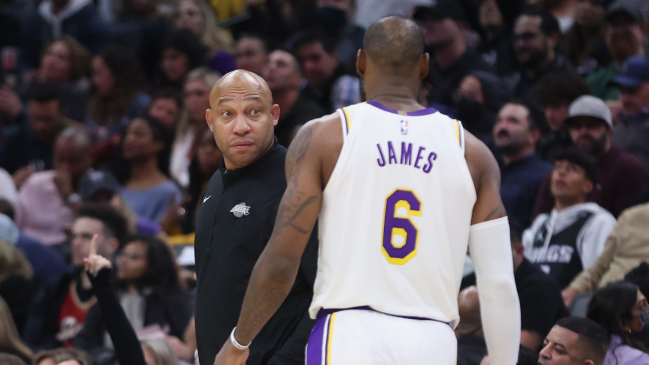 The Los Angeles Lakers are currently 19-21 and sit in 11th place in the NBA’s Western Conference.

Just three years removed from an NBA championship, they look directionless and beyond repair.

Oh, and that’s while fielding a team with LeBron James and Anthony Davis in it. The Lakers’ aging roster doesn’t appear to fit together. Russell Westbrook has been better since moving to the bench but still a shell of himself. And James and Davis can’t seem to stay healthy enough to stay on the court together,

But while James is still putting up jaw-dropping numbers and performances at the age of 38, the Lakers appear content to move forward without making any trades of significance. And James isn’t a fan of that approach.

The Lakers are currently in the midst of a five-game winning streak just to get to 19-21. Following their latest win, a 136-134 nail-biter against the Sacrament Kings, James spoke with Sam Amick of The Athletic about a number of topics.

One of those topics was what the Lakers need to do, and aren’t doing, to improve. Which James spoke about bluntly.

“Y’all know what the f— should be happening,” he told The Athletic at the end of our brief-but-revealing conversation. “I don’t need to talk.”

Amick tried to get James to elaborate further on the comment, but he wouldn’t take the bait.

To see you and the team playing this well, especially with AD out, has me wondering what the conversations with (president of basketball operations) Rob (Pelinka) and (owner) Jeanie (Buss) are like these days in terms of the roster. What’s the nature of your message? What is that communication like?

But LeBron, you’re 38, and you’re doing things that have never been done.

But if you stay quiet, then time is gonna keep marching on, no?

But is that conversation (with ownership and management) evolving?

Right, but we’ve got cell phones. We can call people.

But how’s your patience level? Is that aspect (of this situation) tugging at you?

They’re doing what they feel is best for the franchise.

It’s becoming increasing clear with each passing day that James is fed up with Los Angeles GM Rob Pelinka. That frustration could well come to a head this summer if the Lakers miss the playoffs yet again.